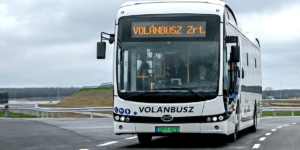 BYD has received an order for 48 electric buses from Hungary’s largest public transport company Volánbusz. The 12-metre-long BYD electric buses are to be delivered to Volánbusz later this year and will be used in five Hungarian cities.

According to BYD, this order represents the Hungarian PTO’s largest electric bus order from BYD to date. The zero-emission buses will be put into operation in the Hungarian cities of Győr, Zalaegerszeg, Szolnok, Szeged and Eger.

The electric buses are equipped with BYD’s Iron-Phosphate Battery technology. The 343kWh battery capacity enables a range of 300 kilometres on a single charge. BYD says the new electric buses will also sport its Battery Thermal Management System, which they say has proven reliability in extreme weather conditions.

This claim does not come from nowhere. The 12-metre buses on order are the company’s most popular model in Europe with over 1000 units currently in operation from Norway to Spain and many countries in between.

This might be BYD’s largest electric bus order in Hungary so far, but it isn’t the bus-maker’s first: Volánbusz Zrt already owns two 12-metre eBuses, one of which was delivered to the Municipality of Salgótarján in 2018 and the other, to the city of Komárom in 2021. The latter was introduced for cross-border bus services across the Danube River to neighbouring Komárno in Slovakia. In addition, BYD says that there are currently a toal of over 70 pure-electric buses in service or on order in 10 cities in Hungary including Salgótarján, Tatabanya, Komárom, Pecs and Miskolc.

The Chinese bus-maker has a home-grown advantage in Hungary: the electric buses will be built locally, since BYD’s European manufacturing facility, called BYD Electric Bus & Truck Hungary Kft, is located in the Hungarian city of Komárom. This is the Chinese company’s first factory in Europe.

On the occasion of announcing the order, László Palkovics, Hungarian Minister of Innovation and Technology, said: “The Government continuously acts towards green public transport according to its ‘Climate and Environmental Protection Action Plan’. Hungary became a regional leader in the rate of renewable energy used in the sector during the past decade, reaching sixth position in Europe and gaining the best result in Central Europe in this field.” He explained that “The Government launched the ‘Green Bus Program’ for the quality upgrade of local bus fleets in rural cities with a budget of 36 billion HUF,” revealing that the initiative is now to be expanded to settlements with population under 25 000, meaning that new tenders for purchasing another 350 electric buses will be announced soon.

Tender for 83 electric buses in Barcelona

Correos puts out tender for 800 electric motorbikes in Spain