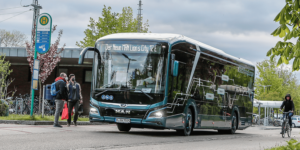 MAN Truck & Bus has just received two orders from Hamburg for a total of 53 electric buses. Hamburger Hochbahn has ordered 17 Lion’s City 18 E, while an order from Verkehrsbetriebe Hamburg-Holstein (VHH) includes 30 electric solo and six articulated buses. The first electric buses are to be delivered this year.

The German manufacturer and Volkswagen subsidiary says it has received orders for more than 700 of its electric buses since the sales launch of the Lion’s City E in 2020. The vehicles are produced at the Polish MAN plant in Starachowice.

“Our goal is quite clearly to put even more electric buses on the road: By 2025, half of our new city buses will be alternatively powered. And we expect that just five years later – in 2030 – 90 percent of our city buses will be battery-powered,” says Rudi Kuchta, Head of Business Unit Bus at MAN Truck & Bus.

With the all-electric MAN Lion’s City E, MAN has completed the new generation of city buses with an emission-free variant. Series production of the 12-metre solo version started in October 2020, while the all-electric Lion’s City 18 E articulated bus went into series production in April 2021. This offers space for up to 130 passengers, the solo bus for up to 88 passengers. For the drive, MAN relies on a central motor on the rear axle in its electric bus and two central motors on the second and third axles in the articulated bus. The energy for the fully electric driveline comes from the batteries on the vehicle roof. The electric buses offer a range of up to 350 kilometres.

Although MAN has been more than a little late to the electrification game, the company has been hurredly trying to make up for lost time ever since. Earlier this month, Volkswagen’s Traton Group to which MAN belongs, announced that it was massively increasing its investment in research and development for electromobility. The company now plans to spend 2.6 billion euros on this by 2026, compared with 1.6 billion euros previously planned by 2025. At the same time, Traton is scaling back its investments in combustion engines. This move comes as Europe is seeing a boom in electric bus sales as European countries decarbonise their public transport services, not only to adhere to EU guidelines to reduce emissions, but also to ease up the geopolitical pressure now on fossil fuels.

A few days ago, Hamburger Hochbahn and Verkehrsbetriebe Hamburg-Holstein received funding decisions from the German federal government for the procurement of a total of 472 electric buses, including charging infrastructure. The funding amount is just under 160 million euros. According to the ministry, these are the first funding notifications within the framework of the directive for the promotion of alternative drives in buses in Germany.

Correos puts out tender for 800 electric motorbikes in Spain