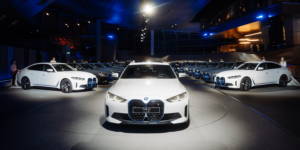 The BMW Group increased global sales of all-electric BMW and Mini vehicles by 149.2% year-on-year in the first quarter of 2022. A total of 35,289 all-electric BMWs and Mini were delivered to customers between January and March.

The company plans to more than double sales of pure electric cars this year compared to last year. In 2021, BMW managed to deliver 103,855 fully electric cars.

With the 35,289 BEVs in the first quarter, the share was 5.9 per cent – across all brands and powertrains, the BMW Group delivered 596,907 vehicles. However, total deliveries fell by 6.2 per cent compared to the same quarter last year.

In terms of all-electric vehicles, the company does not differentiate between the BMW and Mini brands in the statement. Rolls-Royce is included in the overall figures, but not yet in the all-electric cars, as the testing phase of the Spectre is still ongoing.

BMW also does not mention the share or absolute numbers of plug-in hybrids. In 2021 as a whole, the distribution of BEVs and PHEVs among electrified vehicles was roughly one-third battery-electric cars and two-thirds plug-in hybrids.

By the end of 2025, the BMW Group aims to have more than two million fully electric vehicles on the road. Despite the current difficult environment, BMW plans to maintain sales at the 2021 level this year. Last year, just under 2.5 million vehicles were sold.

“Our clear focus is on ramping up electromobility,” said Pieter Nota, board member for sales. “In the first quarter, we stepped up the rapid pace of growth from 2021 even further and are fully on track to meet our ambitious growth targets for fully-electric vehicles in 2022.”