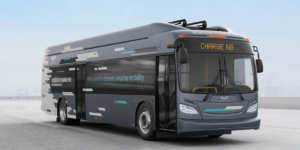 Winnipeg Transit, providing bus services in the capital of the Canadian province of Manitoba, plans to put a total of 110 battery and fuel cell buses into service by 2027. Complete electrification is to be achieved by 2040.

The first batch – which will electrify around 15 per cent of Winnipeg Transit’s bus fleet – will be delivered over a period of around three years. Winnipeg Transit’s project manager in charge, Erin Cooke, told Electric Autonomy Canada that the phased rollout will give the company and the city time to build out the necessary infrastructure.

“Once you start looking at the scales of hundreds of buses it becomes incredibly complicated, so taking the time to do this comprehensive rollout plan is going to be advantageous to scaling this technology up quickly,” she says. Cooke explained that the area has a clean grid, that does not have time-of-use charges, making it easy from an operational standpoint to estimate what the costs are.

“The challenge has been on the utility side and getting power to our existing garages. We need a new transmission line bought in to our garage and, on our side, we need a substation and all the other charging infrastructure. It’s a major project,” she pointed out.

While electric buses are now capable of ranges of around 350 kilometres, this is still decidedly less than the current 500-kilometre range enabled by diesel buses. “About 30 per cent of our runs are really too long to run for a battery-electric, and that’s where we see hydrogen being a viable option,” Cooke says.

The hydrogen buses can be fuelled in 5-10 minutes and offer 500 kilometres or more of range. Since hydrogen is an expensive fuel to import and the area has abundant renewable energy, Winnipeg Transit also plans to run a pilot for on-site hydrogen production. “We can [produce] hydrogen on-site for almost a quarter of the cost of having it delivered right now,” Cooke says.

So far, exactly what models will be procured has not yet been decided. Last year, the public transport operator applied for funding from the Investing in Canada Infrastructure programme. If the company receives a funding decision, the federal government will cover up to 40 per cent of the costs, the province of Manitoba 30 per cent, and the rest will be up to the City of Winnipeg.

LA to electrify the municipal fleet with over 10,000 EVs