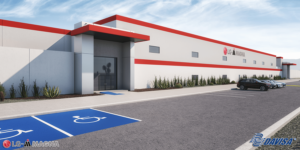 LG Magna e-Powertrain, the joint venture between LG Electronics and Magna, has begun construction of a new plant in Ramos Arizpe, Mexico. This will produce electric motors, inverters and onboard chargers for General Motors from 2023.

General Motors has operated a vehicle plant at the Ramos Arizpe site for years. A few weeks ago, the carmaker began converting the manufacturing facilities for the production of electric cars. For this reason, the production of the Chevrolet Blazer and Equinox models, which have been produced there up to now, will be suspended until mid-May.

GM has not yet officially confirmed which electric models it will build in Ramos Arizpe. However, it is considered very likely that it will be an electric Equinox. In January, General Motors had published several renderings of the Equinox EV at CES as a preview of a production model. The compact SUV is expected to hit the market in autumn 2023 at prices starting at around 30,000 US dollars. GM also announced a Blazer EV for spring 2023. So both models built so far in Ramos Arizpe are to receive EV versions.

Interestingly, GM has so far announced its intention to assemble battery packs and electric motors in addition to the vehicles at its own plant. LG Magna e-Powertrain also wants to do at least the latter – plus the inverters and onboard chargers. At least the timetables are in line with the planned start of production in 2023.

The supplier plant will be around 24,000 square metres (original specification: 260,000 square feet), and up to 400 jobs are to be created there. It will be the first manufacturing site in North America for the joint venture, which was established in July 2021. “This new facility demonstrates the continuing growth of LG Magna e-Powertrain,” said Cheong Won-suk, CEO of LG Magna e-Powertrain. “The JV’s ongoing success will enable us to better support our customers with best-in-class components for the next generation of electric vehicles, and help us to expand our presence in the fast-growing global EV market.”

It goes on to say that General Motors is the “founding customer” for the new plant. However, it remains to be seen whether GM will remain the exclusive long-term customer for the plant or whether other OEMs will also be supplied.