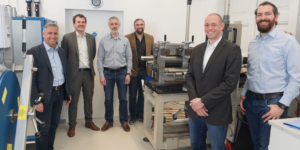 As Virtual Vehicle Research GmbH emphasises in the press release, this is the first purely Styrian consortium in the field of battery research. The partners Materials Center Leoben Forschung GmbH, Varta Innovation GmbH and AVL List GmbH have joined forces for the work, coordinator is Virtual Vehicle Research GmbH. Although Varta Innovation GmbH has a connection to the German company, it is actually a joint venture between Varta Microbattery GmbH and the Graz University of Technology.

The ultimate goal of the ambitious project is to increase the charge density and service life of lithium-ion batteries. The partners want to achieve this with a new anode. This is called a “Hollow Core-Shell Silicon Carbon (HCS Si-C) composite anode”. With the same charging stability of the cell, this should make it possible to increase the energy density by up to 30 per cent.

According to the press release, the development process “effectively combines and bundles the competences of the project partners in various areas”: from simulation to electrode/cell production to electrochemistry. In future, a more targeted, cost-effective and resource-saving production of improved lithium-ion batteries with Si anodes should be made possible.

“OpMoSi is a Styrian showcase project in which the technology for lithium-ion batteries is being taken to the next level,” says Jost Bernasch, Managing Director of Virtual Vehicle Research GmbH. “As consortium leader and scientific partner, we are researching significantly improved energy density for future batteries. We have shown that we can successfully translate basic research results into automotive applications.”

“We have a high level of expertise in the production of electrodes and battery cells, as well as a fundamental understanding of the materials used and the cell layout or design,” says Christoph Stangl, Project Manager at Varta Innovation. “This will allow electrodes and cells to be produced with high quality within the consortium.”

The project is scheduled to last 36 months and is funded by the Austrian Research Promotion Agency (Österreichische Forschungsförderungs GmbH) within the framework of the 17th call for proposals “Mobility of the Future” with a total volume of 2.7 million euros.