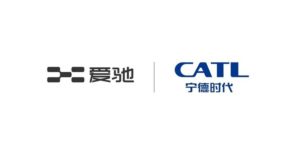 The Chinese battery manufacturer CATL has won Aiways as the first automotive partner for its battery exchange business Evogo. The first suitably equipped Aiways is to be launched on the market this year.

Under an agreement now signed between the two companies, a battery swap-equipped version of Aiways’ first model, the U5 electric SUV, will be developed for launch in the fourth quarter of 2022. CATL initially disseminated this information via its WeChat account, but has since also published an announcement on the matter.

Aiways already relies on CATL battery cells for the U5. However, the 63 kWh battery pack is permanently attached to the vehicle. Depending on the equipment, the WLTP range with this battery is between 400 and 410 kilometres. In our test, we were able to achieve between 250 and 300 kilometres in real terms, depending on driving style and driving profile.

CATL – or rather its subsidiary CAES (Contemporary Amperex Energy Service Technology) – had presented the Evogo battery swap system at the CES in Las Vegas at the beginning of January. Instead of fixed battery packs whose capacity is designed for the vehicle, Evogo is based on smaller battery blocks, which the company calls “Choco-SEB”. SEB stands for Swapping Electric Block and “Choco” is meant to refer to the SEB’s appearance, which is probably meant to resemble a bar of chocolate.

Each block has its own battery management system and uses CATL’s cell-to-pack technology. This is said to give a gravimetric energy density of 160 Wh/kg and a volumetric energy density of 325 Wh/l. Each block is said to offer a range of up to 200 kilometres, according to the information from January. The cycle used to determine this value is not specified – the NEDC or CLTC come into question, but both are not exactly considered to be close to reality.

The basic idea behind the smaller “Choco-SEB” is that the user should only take on board (and pay for the use of) as many blocks as are needed at the time. Depending on the vehicle, one, two or up to three blocks can be mounted – the customer can choose via app. The exchange of a “Choco-SEB” should take around one minute. In addition to changing the batteries, the Choco-SEBs can also be charged in the vehicle – if there is no exchange station nearby.

In the meantime, it has also been determined how much the battery rental will cost: 399 yuan per block, or about 58 euros per month. This was announced by CATL on the occasion of the commissioning of the first Evogo station in Xiamen.

The CATL announcement does not say how many blocks the Aiways U5 will be designed for. Should there actually be up to three blocks, the calculated range of the U5 could increase to up to 600 kilometres. However, it is more likely that there will only be a maximum of two blocks for up to 400 kilometres.

Besides the U5, the FAW model Bestune NAT is compatible with the Evogo system.