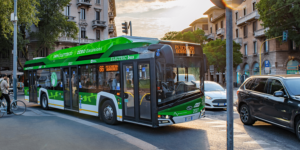 Milan’s public transport operator ATM is continuing the conversion of its bus fleet to electric vehicles: ATM has ordered a further 75 electric buses from Solaris – the company’s Urbino 12 electric buses are due to arrive in Milan later this year.

The new order is part of a 2019 framework contract for up to 250 electric buses. The first two call-offs from the contract for a total of 140 Urbino electric (100 of which are in the second batch) have already been delivered, according to Solaris – the 75 additional buses will bring the total number to 215 vehicles.

The twelve-metre buses for Milan have an almost 400 kWh battery that can be charged quickly using a top-down pantograph. The buses are powered by the usual electric axle with two integrated electric motors and can transport 75 passengers (including standing passengers).

For Milan and ATM, the order is just another intermediate step on the way to converting the entire bus fleet and phasing out all diesel buses by 2030. To this end, the city council gave the go-ahead for a 249 million euro fleet renewal programme in February. With the money, ATM can purchase a total of 350 new zero-emission buses for public transport and the infrastructure for this by June 2026.