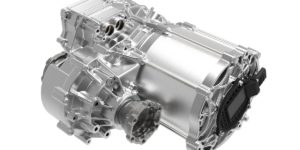 Vitesco Technologies has received a major order worth two billion euros from the Hyundai Motor Group. The South Korean company will use Vitesco drives in B- and C-segment electric cars worldwide from 2024.

The order was already mentioned in March at Vitesco Technologies’ annual press conference, however, without naming the customer. Hyundai Motor Group will use the 160 kW 3-in-1 unit in its global B/C electric vehicle segment from 2024.

However, these will not be models based on Hyundai’s E-GMP: As Vitesco states, the EMR4 operates at 400 volts system voltage, but the E-GMP is a pure 800-volt platform – where Vitesco supplies the 800-volt inverter. The South Korean company had already repeatedly indicated that they would continue to use 400 volts for some models in addition to the 800-volt technology.

With an output of 160 kW, the drives are ten kW higher than the output of Hyundai-Kia’s current 400-volt electric vehicles, such as the Kona Electric or the Kia Niro EV, which will soon be launched in its second generation – with 150 kW drive power. Within the EMR4 range, however, Hyundai is only in the middle power range. As Vitesco announced at the presentation of the new drive generation in July 2021, the EMR4 (Electronics Motor Reducer) can cover the spectrum from 80 to 230 kW – instead of the much smaller trunks of 120 to 150 kW in the EMR3.

The EMR4 is not only said to be more efficient than the previous generation EMR3, which increases the range – this is said to be achieved, among other things, by semiconductors made of silicon carbide (SiC). Vitesco also emphasises that the EMR4 is 25 per cent lighter and also smaller with the same performance. Thanks to the smaller dimensions, the drive should be easier to integrate into the vehicle design.

“For our new electric axle drive, we have standardized the internal interfaces, while generating the greatest possible flexibility externally, so that we can offer customized and at the same time cost-optimized solutions,” says Thomas Stierle, member of the executive board and head of the Electrification Technology business unit at Vitesco Technologies. The cost advantages arise, among other things, from the fact that all variants of the EMR4 can be manufactured on one production line. The EMR4 is manufactured in the Chinese plant in Tianjin, among other locations.

“We are proud to contribute to Hyundai Motor Group’s upcoming electric vehicle platform with this highly attractive axle drive,” says Vitesco CEO Andreas Wolf. “This order once again confirms us in our strategy with the very early focus on electric mobility.”