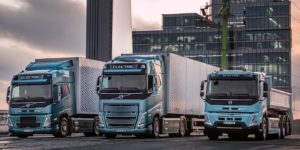 Volvo Trucks has now officially opened the ordering system for its range of heavy electric trucks, the FH, FM and FMX. Until now, Volvo Trucks had mainly offered customers and partners to sign letters of intent to buy, but now the manufacturer is starting to take firm orders.

However, only the trucks are currently open for sale. For the rest of the chassis, the sales release is set for the fourth quarter of 2022, with rigid versions are then not to be delivered until 2023. Series production of the heavy-duty electric trucks in Gothenburg is scheduled to begin in the autumn and will be ramped up gradually, according to the manufacturer. Planned unit numbers or sales targets are not mentioned, however.

Volvo published technical data on the electric truck trio FH, FM and FMX in June 2021. The company is positioning the FH Electric in the regional and inter-regional transport segment, the FM Electric as a versatile truck for local heavy transport and regional distribution transport, and the FMX Electric as a vehicle for cleaner and quieter construction transport.

“This is a milestone for Volvo Trucks. There is a lot of interest from customers to place orders for these fantastic trucks,” says Roger Alm, President of Volvo Trucks. “Until now we have mainly offered customers and partners to sign letters of intent to buy, but now we start to sign firm orders, which is a major step forward for electrification.”

In 2021, Volvo Trucks took orders, including purchase intentions, for more than 1,100 electric trucks in over 20 countries. Electric versions of the Volvo FE and Volvo FL medium-duty truck models and VNR (for North America) are already in series production. With the three existing and three new models, Volvo says it covers the range from 16 to 44 tonnes.

These are exclusively battery-electric trucks. But the future use of fuel cells in Volvo Group’s heavy trucks has recently cleared an important hurdle: In a referendum in Weilheim an der Teck, local residents voted in favour of allowing the fuel cell factory of the Cellcentric joint venture between Daimler Truck and Volvo to be built as planned in the Esslingen district near Stuttgart.

Daimler Buses wants to sell only electric city buses from 2030