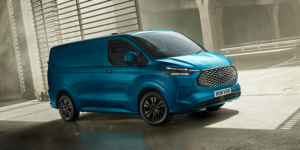 Ford Pro has unveiled the all-electric E-Transit Custom, which will go into production in the second half of 2023. The E-Transit Custom is expected to offer a range of up to 380 kilometres and a towing capacity similar to the diesel version.

Ford is not yet disclosing further technical data on the electric drive system, the battery and the charging system. Details are to be published in connection with the IAA Transportation in September. Until then, the general word is that the E-Transit Custom is intended to help commercial customers make the switch to electrified commercial vehicles in the important one-tonne payload class segment.

A relationship to the larger E-Transit from the two-tonne payload class is possible: the latter comes with a net 68 kWh battery to a standard range of up to 317 kilometres – in the smaller and lighter E-Transit Custom, the mentioned 380 kilometres could be possible with a similar battery. The towing capacity of the current diesel models is up to 1.9 tonnes.

Like the large E-Transit, the E-Transit Custom will also have optional “Pro Power Onboard”. These are 230-volt sockets in the vehicle that are supplied with on-board power via a generator and can be used, for example, to cool cargo or to operate equipment and tools on the construction site that would otherwise require an external power generator.

Ford Pro is to be an important element alongside electrification. This is Ford’s ecosystem for services around (electric) commercial vehicles, which it spun off last year as its own vehicle service and sales company. The aim is to increase vehicle utilisation and productivity and reduce costs. Hans Schep, general manager of Ford Pro Europe, sees the E-Transit Custom as “a game-changer for commercial vehicle customers in Europe”. “Europe’s best-selling van just went all-electric and – supported by our unique Ford Pro one-stop-shop of productivity-boosting services – the operating benefits this will bring to business across Europe cannot be overstated,” says Schep.

The new E-Transit Custom itself looks more like a facelift of the current generation with the usual panel van shape. The headlights are drawn a little more dynamically and will in future be connected by a white LED light strip. A radiator grille is still present, as the Transit will also continue to be available as a diesel. In the published press photos, the charging port is on the front right. However, this is a vehicle with British licence plates – it is currently unclear whether the left-hand drive vehicle will have the charging port on the driver’s side on the left.