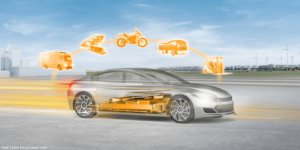 Farasis Energy is expanding its fourth generation of battery cells for electric vehicles with a variant called Ultra High Power, which, according to the manufacturer, achieves a fast charging time of less than 15 minutes – while maintaining a high energy density of 300 Wh/kg.

Farasis had already presented the fourth generation of its battery cells in March 2021. These generally achieve an energy density of up to 330 Wh/kg, which is supposed to correspond to an increase of 25 per cent. However, the variants presented at that time were still stated with a fast-charge time of 10 to 80% SoC of “less than 20 minutes”.

With the high energy density, the development focus was clearly on range, as Keith Kepler, CTO and co-founder of Farasis Energy, also states. “The goal was to get close to the ranges of vehicles with internal combustion engines,” says Kepler. “This is where we have been able to make tremendous progress over the last few years.”

But this focus has since shifted: “We are noticing, however, that in addition to the desire for more range, car manufacturers and consumers are increasingly focusing on fast charging times,” says Stefan Bergold, General Manager at Farasis Energy Europe. “In developing our ‘Ultra High Power’ variant, we have therefore brought both trends together by offering high energy density for long ranges and high power for fast charging capability. This allows us to serve our customers’ needs on both counts.”

At its core, this is also based on Generation 4 cell chemistry, but precisely with a focus on fast-charging capability. This reduces the energy density somewhat, but also the charging time from ten to 80 per cent. This standard charging window should be possible in less than 15 minutes. Another calculation example from Farasis: to recharge electricity for 250 kilometres, only eight minutes should be needed. “Our goal is therefore to enable a charging process in the future that is in no way inferior in time to the conventional refuelling process of a car with an internal combustion engine,” says Bergold.

The energy density is still 300 Wh/kg (instead of 330) and 692 Wh/l (instead of up to 750). This should still allow ranges of more than 700 kilometres in the vehicle, according to Farasis. Compared to the current Generation 1 (285 Wh/kg), such a pack is still 30 kilogrammes lighter.

As far as durability is concerned, the specification of the “Ultra High Power” variant is the same: like the other fourth-generation cells, it is given with 1,500 cycles. In the case of the example vehicle with a range of 700 kilometres, this corresponds to calculated a driving performance of over one million kilometres.

According to Farasis, the performance of the fourth-generation battery cells has been confirmed in extensive tests with various customers. Farasis is now preparing for industrial production, which is planned for 2025.

However, production will probably not take place in Bitterfeld-Wolfen: As was announced last week, Bitterfeld-Wolfen has terminated the urban development contract with Farasis Energy Europe. Farasis stated that it was “still working on adapting our localisation strategy for Europe, of course always in close consultation with our customers”. The plans for Bitterfeld-Wolfen have been “put on hold for the time being” due to a “shift in priorities”. However, the company remains the owner of the land.

Green Lithium to refine lithium in the UK