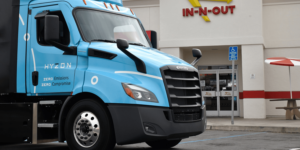 For its Repower program, Hyzon Motors is collaborating with US firm Fontaine Modification. Diesel components will be removed from existing trucks that will then be upfitted with Hyzon’s fuel cell system, electric powertrain and hydrogen storage system.

Hyzon partner Fontaine Modification is primarily active in the USA. Hyzon’s heavy-duty fuel cell systems for the Repower program with Fontaine will be produced in the Hyzon’s Bolingbrook facility in Illinois. Hyzon Motors is very active internationally, producing and delivering its own fuel cell vehicles in several countries globally.

Hyzon Motors says it is responding to the demand for clean commercial vehicles amidst a global supply chain crises. The lead time for new vehicle chassis ordered today is up to 16 months. Retrofitting existing chassis will get more clean vehicles on the roads sooner, as well as saving costs for fleet owners and truck operators and making the most of existing resources.

A first example from the Repower programme is currently on display at the Advanced Clean Transportation (ACT) Expo in Long Beach, where Hyzon Motors co-founder and CEO Craig Knight is currently also a speaker. The demonstration vehicle still has the 110 kW version of the fuel cell family developed and manufactured by Hyzon. By the end of 2022, the first vehicles will be retrofitted and tested with the 200-kW stack, which is Hyzon’s most powerful stack.

Hyzon has not given further details on the drive and range of the converted trucks presumably because the size of the tanks and other components can of course differ depending on the basic vehicle to be converted.

“The Repower program is a natural solution for our current situation: customers are seeking to urgently reduce emissions, but current supply chain constraints make it very challenging to meet demand. Thanks to the in-house production of our proprietary fuel cells, Hyzon’s Repower program can deliver zero-emissions vehicles to customers sooner, with lower cost, and less waste,” said Hyzon CEO Craig Knight.