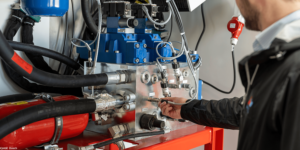 Bosch Rexroth and Maximator Hydrogen have developed a solution for the compression of hydrogen for filling stations. By 2030, the two companies want to equip 4,000 refuelling stations with the technology.

Bosch says that, as a result this solution, every third hydrogen filling station worldwide will have Bosch components. The plan is part of the Bosch hydrogen campaign, which also includes entering the component business for electrolysers and the further development of its Hydrogen Energy Platform.

Bosch Rexroth says it offers low-maintenance, scalable system solutions for hydrogen compressors with electrohydraulic drives, power electronics and automated seal replacement. According to Bosch, this is intended to offer filling station operators a cost-effective entry into hydrogen technology and adaptation to suit their needs. The new container-based compressors have “the potential to reduce the total costs for operators by half compared to alternatives available on the market”.

Just recently, the company announced that it is also entering the development of components for electrolysers. The company is locating the electrolysis components in the mobility sector because of its existing competences and is investing up to 500 million euros for this purpose by the end of the decade. In the process, know-how from fuel cell development is to be used.

As the term “hydrogen economy” suggests, this describes a holistic process of considering the production, supply, transport and use of hydrogen. “On the path to a climate-neutral future, we have to make it possible for energy-intensive industries to shift to renewables. Hydrogen will be a key element in security of supply,” says Rolf Najork, the Bosch management board member responsible for industrial technology and the company’s manufacturing technology chief. Manufacturing operations account for some 90 percent of Bosch’s global energy consumption. This German engineering company sees this as an important lever.

The solution developed by Bosch Rexroth and Maximator Hydrogen for compressing hydrogen for filling stations, storage tanks, and pipelines is to be trialed at the company’s Homburg plant. Here, a hydrogen energy platform involving the entire cycle of H2 production and use is developed. The German company says that its hydrogen Energy Platform is already being used in more than 120 of its plants globally.

With the new solution for hydrogen compressors, Bosch and Maximator Hydrogen see the technology as helping make the use of green hydrogen economical – in passenger cars, commercial vehicles, buses, and trains. Here it must be said, the greater energy density of hydrogen fuel cell technology in combination with the impending energy crisis, make hydrogen fuel cell technology unavoidable for hard-to-decarbonise transport sectors, such as heavy-duty long haul vehicles, shipping, rail and aviation – despite its lesser efficiency than purely battery electric vehicles, which is generally considered more effective technology for smaller vehicles such as passenger cars and anything smaller.