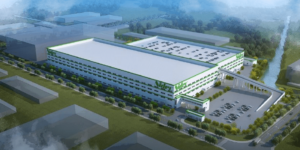 Japanese electric motor manufacturer Nidec announces the construction of a new electric axle drive factory in China. The factory in Pinghu in China’s Zhejiang province will be designed for an annual capacity of one million units and is scheduled to start production in October 2023.

The new factory, the construction of which is scheduled to start in October this year, will be the company’s fourth electric axle drive assembly plant in China. The company says the maximum annual production capacity from the 2024 financial year will be one million units. The facility will not exclusively produce electric axle units, but will function as a plant specialised in electric vehicles, consolidating the Nidec Group’s component businesses.

Nidec said it has sold more than 370,000 of its electric axle drives – the traction motor system that the company had put into production in April 2019. In the coming years, the Japanese company plans to sell 3.6 million units of their axle drive, with a planned production capacity of seven million units for the 2025 financial year.

Nidec aims to achieve a 40-45 per cent market share in EV traction motors by 2030, according to its own targets. So far, the company has confirmed agreements with Geely brands Zeekr and Geometry, GAC and Foxconn. In Europe, Nidec manufactures electric motors in a joint venture with PSA, among others.