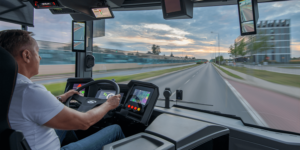 CATL did not specify the scope of the order in the announcement. Instead, it emphasises rather generally that the agreement is intended to promote the electrification of buses. Only how many buses are to be electrified is not mentioned.

Since only the brief communication from CATL is available so far, it is not yet known how Solaris will use the LFP cells – i.e. whether the LFP battery will only be offered in certain e-bus models or in all vehicles.

Lithium iron phosphate cells generally have a longer service life and higher thermal stability – even in the event of mechanical damage and/or a short circuit, the likelihood of a battery fire is significantly lower. However, LFP cells have a lower energy density than lithium-ion batteries with NCM or NCA cathode. In buses, however, the energy density of the battery is not quite as important as in passenger cars due to the space available.

In addition: CATL wants to compensate for the disadvantage of the lower energy density with the so-called cell-to-pack technology. This eliminates the intermediate step of first assembling the battery cells into modules. Usually, such modules are then combined into a battery pack. With CTP technology, the cells are installed directly in the battery pack – since this eliminates the installation space and weight of the modules and the necessary wiring, more cells can be installed in a battery pack of the same size.

Solaris is one of the largest manufacturers of zero-emission buses in Europe. While many electric buses in China rely on LFP cells, other lithium-ion batteries are common in this country. The Chinese bus manufacturer BYD, for example, also relies exclusively on its own LFP batteries for its European vehicles.