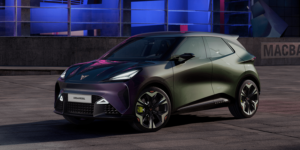 Cupra has provided an updated preview of its UrbanRebel all-electric small car planned for 2025. The new concept is much closer to series production than the UrbanRebel Concept presented in 2021.

With its very wide wheel arches and large rear wing, the IAA study was still strongly reminiscent of a racing car. The sporty look has been retained in the study now on show, and the headlights and tail lights also resemble the extreme UrbanRebel Concept. In terms of width and proportions, however, the UrbanRebel is now much closer to a potential production model. However, it remains a concept vehicle – door handles, for example, are nowhere to be found.

The front-wheel-drive urban electric car is based on the Volkswagen Group’s ‘MEB Small’ platform. The UrbanRebel is announced to have an electric motor with 166 kW and a range of up to 440 kilometres in the “Range Version”. The 4.03-metre-long small car is said to be able to accelerate to 100 km/h in 6.9 seconds. Cupra is not yet giving any further details on the technology. The output of 166 kW is probably much closer to series production than the 320 kW of the IAA concept.

Production is planned in Martorell as soon as the Spanish government’s PERTE funding programme is approved. As previously reported, Cupra wants to become a pure electric brand by 2030. In the course of this, the production of Cupra electric cars in the Spanish plants is also planned. The brand’s first BEV, the Born, will be built in Zwickau along with other MEB models.

“The CUPRA UrbanRebel will be the biggest project for our company in the upcoming years, since it is key for our transformation as a fully electric brand,” said Werner Tietz, Cupra’s board member for research and development. “We are leading the cluster development, the family of vehicles that will democratize sustainable urban mobility, for different brands within the Volkswagen Group.”

At the “Unstoppable Impulse Event” in Sitges near Barcelona, Cupra also gave a preview of two other electrified models in addition to the UrbanRebel: the fully electric MEB-based Tavascan planned for 2024 and the new Terramar – an SUV that is to be launched on the market with various combustion engines as well as with a new generation of plug-in hybrid drives. The electric range is around 100 kilometres. The Cupra Terramar will be produced at the Audi plant in Győr, Hungary. Cupra does not mention where the Tavascan will be built in the press release.

“Tonight, we show the entire range of CUPRA’s next generation of heroes to be launched by 2025,” said Cupra CEO Wayne Griffiths. “In the midterm, our aim is to deliver 500,000 cars per year and push forward with our international expansion into new markets as well as entering new segments.”