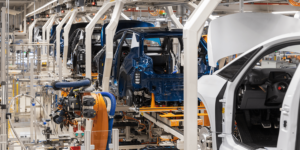 The partners of the Future: Fast Forward initiative led by the Volkswagen Group and the Seat brand have now applied for the “Strategic Project for Economic Recovery and Transformation” programme (abbreviation in Spanish: PERTE) – with the aim of making Spain a hub for electric vehicles in Europe.

With 62 companies from various sectors in 11 regions, it is the largest grouping of companies in the history of the automotive industry in Spain. According to Seat, 61 per cent of the companies are SMEs, so it is not only large corporations that are being promoted. However, the initiative is headed by a company representative: Marc Riera, Director of Purchasing Strategy and New Projects at Seat, has been appointed President of the General Assembly and Delegates Committee of Future: Fast Forward.

The project now presented consists of four main pillars: The core pillar, led by Seat and the Volkswagen Group, aims to electrify the factories in Martorell and Pamplona. The second pillar is the creation of a battery ecosystem for electric cars in Spain, ranging from lithium extraction to battery assembly, including the battery factory near Valencia confirmed in March. The third pillar provides for the localisation of essential components for electric vehicles in Spain and the fourth covers areas related to training, digitalisation and the circular economy.

As in March when the battery factory was announced, VW, or in this case Seat, states that a positive PERTE decision is a prerequisite for the plans to be implemented. It is not clear from the communication when the funding decision is expected.

Volkswagen already sold out of electric cars for 2022