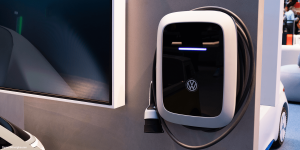 In a joint pilot project, German companies Elli and Mitnetz Strom have started tests to optimised charging strategies. The project aims to achieve efficient interaction between the electricity grid and electromobility with electric cars from the VW Group.

The change in large parts of mobility towards electrification brings new challenges. For example, the demands on the distribution networks are growing and care must be taken to ensure that the networks are not overloaded. Especially in view of the growing share of renewable energies, the group considers suitable storage options to be necessary, because “sun and wind do not supply energy at the same time”.

In the project, VW’s charging service provider Elli and the distribution grid operator Mitnetz Strom now want to demonstrate how customer-friendly products for the intelligent charging of electric vehicles can be implemented with “time-variable, monetary incentives”. Both regional electricity generation from renewable energies and the available capacities in the distribution grid are to be taken into account.

The project will be implemented in the vicinity of Volkswagen’s Zwickau site. VW intends to use the findings of the pilot application to draw up concrete recommendations for action “for the further development of the legal and regulatory framework”. In addition, a scalable concept for secure and efficient data exchange between customers, suppliers and grid operators is to be developed.

In the first step, around 20 drivers of VW models ID.3, ID.4 and ID.5 are taking part in making electric cars part of the energy system in the future and increasingly using green electricity from the region for charging. The results of the pilot test are expected in autumn 2022.

The partners presented the solution of what a practical implementation of smart charging could look like at the E-World in Essen, Germany. An algorithm compares the charging plans of the cars via price incentives with the regional electricity generation from renewable energies and the available capacities in the distribution grid. The resulting flexible grid usage is intended to reduce the frequency of bottlenecks in the electricity grid and create financial benefits for the participants.

“With this project, we are demonstrating for the first time how electric cars can be synchronized with the power grid in a user-friendly way. The car becomes a rolling electricity storage unit for the grid operator. For drivers, financial added value is generated via price incentives,” says Niklas Schirmer, Vice President Strategy Elli. “By making the electricity demand of EVs more flexible, more renewable, regionally generated electricity can be used.” In 2020 alone, about 6,200 GWh of green power had to be curtailed in Germany.

Another important step in the circular economy of batteries is the used of second-life batteries that are no longer powerful enough for electric cars, but still perfectly functional for stationary storage applications such as powering charging support while storing intermittent renewable energy in addition to the application described above. Although second-life batteries were not explicitly mentioned with regards to this project, in May just passed, Volkswagen announced that it wants to bundle activities along the battery value chain in collaboration with the European Company (Société Européenne) founded last December. This also includes new business models around second-life uses for vehicle batteries and closed-loop recycling of valuable raw materials. The operational business will start at the beginning of July this year.

When in Autumn, the demonstration project between charging service provider Elli and the distribution grid operator Mitnetz Strom should provide valuable results to further grid planning and charging electric vehicles with renewable energy.