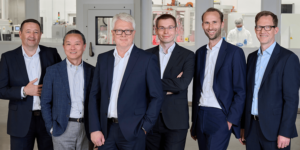 With the European Company (Société Européenne) founded last December, Volkswagen wants to bundle activities along the battery value chain. The group has now presented six members to make the Board of Directors, headed by Frank Blome, which is to expand the battery business from Salzgitter.

As mentioned, the Board is responsible for activities along the battery value chain – from raw material purchasing and processing to the development of the VW unit cell and the management of initially six gigafactories, Volkswagen writes in a press release. This also includes new business models around second-life uses for vehicle batteries and closed-loop recycling of valuable raw materials. The operational business will start at the beginning of July.

“We have established one of the most competent battery teams in the world and are therefore at the forefront of the competition,” says Herbert Diess, CEO of Volkswagen AG. “Volkswagen has the size and clout to secure the ramp-up of the e-mobility strategy with its own battery roadmap.”

Alongside CEO Frank Blome, Sebastian Wolf has been appointed COO. His responsibilities include the planning, construction and operation of the planned cell factories in Europe. The production engineer’s professional experience includes management positions at Bosch and Boston Consulting, and he was also the European board member of the Chinese battery manufacturer Farasis Energy. Chief Financial Officer is Kai Alexander Müller, who is responsible for Controlling & Accounting, Treasury and Investor Relations in the new company. Born in Frankfurt, he has worked for Berenberg, Bank of America and Barclays in London, among others. He accompanied several IPOs.

CTO Soonho Ahn is responsible for technology and product development as well as testing and analytics. The chemical engineer was born in Seoul in 1960. He held various management positions at LG Chem, Samsung SDI and Apple. As Chief Purchasing Officer, Jörg Teichmann will be responsible for raw material purchasing, supplier management and value engineering. He has held positions at Butz Ieper, ZF Friedrichshafen and the BMW Group, among others. As Chief Human Resources Officer, Sebastian Krapoth will be responsible for Human Resources, Culture & Change Management and organisational issues. The graduate psychologist began his professional career in 1999 at Volkswagen Coaching GmbH. In 2019, he was appointed Chief Human Resources Officer of Volkswagen Slovakia in Bratislava.

Some personnel announcements are not new. In December, Volkswagen already confirmed the previously leaked signing of Apple’s battery development chief Soonho Ahn as well as Kai Alexander Müller as finance expert. The likewise leaked appointment of Jörg Hoffmann was not confirmed at the time.

The company’s headquarters in Salzgitter will serve as the group’s battery hub in Europe. As in December, Volkswagen has not named the new company. At the time, it was said that third parties would also be able to participate in the SE as investors. However, the company did not disclose any new information on this. The battery team in Salzgitter is to grow “in a short time” from 750 to 1200 employees, Volkswagen writes. Of around 500 vacancies, more than 200 will be filled externally.

Volkswagen is known to be planning to build six gigafactories in Europe to meet the group’s growing demand for cells. In 2025, a cell production facility is to open in Salzgitter: the gigafactory in Lower Saxony will produce unit cells for the Volkswagen Group’s volume segment.