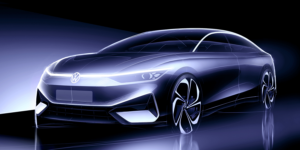 The production version of the ID. Aero, VW’s first electric sedan, is expected to be launched in the second half of 2023, first in China. The presentation of the near-production study will take place next Monday, 27 June. The corresponding production model for the North American and European markets is to be presented in 2023.

According to VW, the design sketches that have now been published are intended to give a preview of a “future China model in the upper mid-size class”. It is a four-door model with a widely stretched roof arch and slightly raised rear. The flowing silhouette should give the car a generous amount of space, according to the Wolfsburg-based company.

While the concept version of the ID. Aero quite clearly bore the unmistakable brand face of the ID. models, the front design on the China model has been further developed, at least on the sketches. The basic shape of the headlights, for example, remains very similar, but is more angular. The rest of the front is also characterised by clear lines and angles. The online premiere next Monday will show whether this is also the case for the production model.

It is unclear how the Chinese version will differ from the European and North American versions. So far, the changes to the ID.4 X and ID.4 Crozz built in China have been rather minor compared to the European ID.4 from Zwickau and Emden. However, the Chinese model was also derived from the European vehicle. The fact that the China model is presented in advance for the E-limousine could speak for a greater independence.

However, the independence will largely be limited to the design, because the technology is clear: like all ID. models, the sedan is also based on Volkswagen’s modular e-drive system (MEB). Although there may be further developments in the software, the current drives with the 58- or 77-kWh battery will probably also be used in the new model.

Differences in range to the known models will mainly result from the bodywork. The ID. Aero is of course significantly flatter than an ID.4 and ID.5. In addition, compared to the ID.3, the longer front and especially the long tapered saloon rear help with airflow around the car. As VW points out in the statement, the aerodynamically designed front and roof sections should help reduce energy consumption and increase range.

As the Wolfsburg-based company confirms, series production will start at the Emden plant in 2023 after the presentation of the series model for Europe and North America – the North American vehicles will also be produced in Germany and then shipped. At least for Europe, the e-sedan is not likely to remain alone for long: VW had already announced an electric station wagon in 2020 for 2023.

Honda starts construction of another electric car plant in China