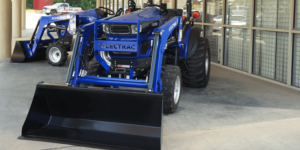 Californian company Solectrac, makers of electric tractors and an operating company of Ideanomics, announced the continued expansion of its certified dealer network. The company now has three fully electric utility vehicles in its range.

In August last year, the company opened the order books for the e70N electric tractor. The N stands for narrow, and is built to replace fossil-fuel-powered counterparts. Performance comes from a 52 kW all-wheel drive and a 60 kWh LFP battery is said to allow up to eight hours of operation, with the company also mentioning solar array options online. Lifting capacity is given at 2000 lbs.

In the meantime, Solectrac offers three electric utility vehicles, the e25, the 40HP eUtility, and the aforementioned e70N. Solectrac has recently opened order books for its latest vehicle, the e25, a four-wheel-drive tractor. The company says the vehicle is ideal for for hobby farms, golf courses, sports fields, equestrian centres and municipalities. Solectrac assures potential customers that its tractors are being delivered in 30 days or less from these local dealers.

“We are thrilled about our rapidly expanding dealer network and how we will be able to meet the demand for our tractors in additional key regions across the country,” said Mani Iyer, CEO of Solectrac. “We welcome Ocala Tractor, Schow’s and Georgia Land Equipment to the growing Solectrac family. Their support has bolstered our nationwide strategy to bring the benefits of zero-emission tractors with low maintenance to the market through trusted dealers. This puts us well on track to reach our 2022 sales goals.”

Ideanomics is a Chinese-US fintech and sustainable transport company based in New York. Since the Group came in on the electric vehicle radar less than a year ago with its Solectrac fully electric farm and municipal tractor, the company has been rapidly expanding its horizons in the sector.

Just weeks after launching its first electric utility vehicle with Solectrac in August last year, the company acquisitioned Via Motors. Via Motors’ vehicles are based on a proprietary skateboard platform that the company says is scalable and flexible for Class 2, 3, 4 and 5 vans and trucks with a modular body approach. Early this year, Ideanomics invested heavily the Slovakian battery specialist InoBat.

In February this year, US Hybrid, an Ideanomics subsidiary, announced an order from Antelope Valley Transit Authority (AVTA). It is also not the first time AVTA has turned to an Ideanomics company. In 2017, AVTA started working with WAVE, another subsidiary of Ideanomics, to implement high-power wireless charging pads both in-route and bus depot. As a result, the agency claims it now powers the largest electric bus fleet in the US with 65 zero-emission vehicles.

For Ideanomics, California-based subsidiary Solectrac seems to have very clear goals. The company says “Solectrac tractors provide an opportunity for farmers around the world to power their tractors by using the sun, wind, and other clean, renewable sources of energy. The company’s mission is to offer farmers independence from the pollution, infrastructure, and price volatility associated with fossil fuels.”

Ideanomics itself has similarly clea goals as a global group: “By bringing together vehicles and charging technology with design, implementation, and financial services, we provide solutions for the commercial world to commit to an EV future.”