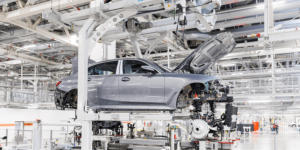 The BMW plant in San Luis Potosi, Mexico, is rumoured to have plans to produce electric cars based on the New Class for the North American market from 2027. Reports claim an i3 sedan and station wagon are planned, as well as the new generation of the iX3.

The plans in Mexico were first reported by Motor1.com, a brand of the US media company Motorsport Network based in Miami (USA) and London in Great Britain. The article links to the post at Bimmer Post. Motor1.com describes the information as a rumour that cannot yet be confirmed. When asked by our German colleagues at electrive at BMW, a press spokesperson replied that “we do not comment on rumours about future vehicle generations (2027 and later)”.

The i3 model designation is free for new models, as the production of the previous i3 compact electric car in Leipzig is now ending with a special edition limited to ten units. In China, the i3 designation is already used for an electric sedan for the local market. In Europe, the first electric cars based on the new-class platform will be manufactured in Debrecen, Hungary from 2025, as reported.

Volvo will build electric cars at a new plant in Slovakia

Jaguar to launch trio of electric sports SUVs in 2025