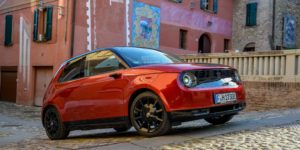 Honda has unveiled a new Limited Edition for its all-electric urban EV Honda e, which will be released with only 50 units across Europe. With prices in the UK starting from £38,120, the Honda e Limited Edition is based on the Advance Grade.

While the limited-edition vehicle based on the popular BEV released in 2019 does not boast many technical differences to the ‘Advance Grade’ version, it is available for the in “Premium Crystal Red paint with a host of contrasting black accents”. To accentuate the look, black badges were introduced at the front and rear, combined with unique 17” black alloys.

Our reporters were able to test the Honda e in 2021, also using the Advance Grade option, and found it to be an effective city car, however also wrote that the car was pricey for what it offered compared to Honda’s competition in the segment. While the price hasn’t gone down, our reporter also asserted that “those who favour a Honda e usually do not do so out of considerations of practical value. They like the design or the interior with its five monitors. There is no question that there is a niche for premium commuter cars.”

However, there have been more positive reviews of the vehicle as well: “The Honda e Limited Edition is simply lovely,” said Formula 1 driver Max Verstappen, adding: “It has funky looks, a compact design and is fun to drive. It’s a great electric urban vehicle.”

Honda has been building up their electric vehicle stable for some time – most recently, Honda announced a hybrid version of the Civic, to be released this year. This is part of the company’s plan to offer an electric variant of each vehicle in Europe by the end of this year. To help build on this, Honda is currently working on three dedicated EV platforms, which the company plans to debut around 2024. This will then allow them to achieve their plan to have 30 battery- and hybrid-electric vehicle models on offer by 2030.