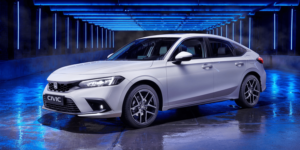 Honda has presented its next electrified model for Europe with the Civic e:HEV. As the eleventh-generation compact model is due to be launched this year, the Japanese company is also keeping to its announcement to electrify the entire model portfolio in Europe by the end of 2022.

Since the Civic e:HEV – as the model name reveals – is another hybrid model, the Honda electric small car remains the only battery-electric car in the electrified portfolio. The other models, the Jazz, Jazz Crosstar, CR-V and HR-V are only available as full hybrids.

The eleventh generation of the Civic compact car will also no longer be available as a pure combustion engine, but only as a full hybrid. The Civic e:HEV also relies on the serial hybrid layout like the Jazz e:HEV The two-litre petrol engine serves only as an energy source. The first electric motor acts as a generator and converts the kinetic energy of the combustion engine into electricity. This is then fed via a lithium-ion battery to the electric drive, which has an output of up to 135 kW. The combustion engine, which is operated in the Atkinson cycle, does not drive the wheels directly. Honda has not yet named prices, the market launch is planned for autumn 2022.

Beyond the hybrid Civic, Honda wants to bring further electrified models in 2023 and thus “create the most comprehensive European product programme in many years”. Next year, the Honda e will then also be joined by another BEV, which will not be the long-suspected sports coupe based on the electric small car.

According to the announcement, the new additions include an all-electric SUV in the B-segment, the e:Ny1 Prototype, a full hybrid SUV in the C-segment, and the new CR-V, which will be available for the first time in Europe with both full hybrid and plug-in hybrid powertrains. Honda describes the e:Ny1 as the “centrepiece of the future model range”.

“The completion of our electrification goal marks a significant moment for Honda in Europe,” says Tom Gardner, Senior Vice President, Honda Motor Europe. “However, we’re not resting on our laurels. We are already well advanced with our plans to further expand the choice of battery-electric and hybrid vehicles for our customers and increase our offering in the fast-growing B- and C-SUV segments.”