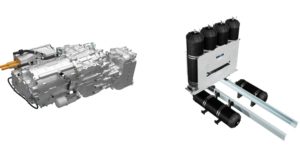 The German manufacturer Voith is expanding its eMobility portfolio. At the IAA Transportation this year, the conversion expert plans to present a “Plug & Drive” H2 storage system suitable for heavy-duty commercial vehicles. There is also a new variant of the Voith Electrical Drive System (VEDS) for heavy electric trucks.

According to Voith, its H2 Plug & Drive is a modular overall system for heavy commercial vehicles with hydrogen drive. It is specifically designed for commercial vehicles, construction site vehicles and similar heavy-duty applications where the use of battery-electric concepts is “not economically or technically feasible”.

As with the VEDS launched in 2019, Voith says it has followed the holistic approach as a system provider – customers are to receive everything from a single source, from the tank nozzle to the fuel cell inlet, including a patented assembly system to accommodate the H2 tanks.

The Voith Plug & Drive hydrogen storage system is to operate at 700 bar pressure. In this way, Voith wants to ensure “long ranges despite limited installation space”. For the H2 tanks, a diagram shows four upright tanks behind the driver’s cab and two further tanks on the sides of the vehicle. These consist of pre-impregnated fibres, so-called TowPregs that Voith manufactures itself. A special winding process is used in the production that enables optimised winding layers. The company says that this allows higher H2 storage quantities without compromising safety, even at high pressures in the tank.

In addition to the hydrogen system, Voith will present the further development of the VEDS at the trade fair. The portfolio of the modular drive system consists of the heavy-duty version for double-decker and articulated buses with up to 340 kW, the medium-duty version with 240 kW for solo buses and, most recently, the HD+ version for heavy trucks, which will also be available in special variants for refuse collection vehicles, inner-city logistics or long-distance transport applications. The core of the new HD+ system is a new innovative automated four-speed electric transmission. This ensures that optimum traction is available in every driving situation and under every load condition.

“Alternative, sustainable drives determine the discourse of the present and the technologies of the future,” says Martin Wawra, Executive Vice President and CEO of Voith Turbo Mobility. “The result is already an unprecedented variety of drive solutions. We are meeting these customer demands with a portfolio focused on alternative drives.”

The company is well situated in the inexorably and rapidly accelerating transport transition off fossil fuels. Voith was founded over 150 years ago in the first industrial revolution. The German company is still 100 per cent family-owned, as well as being very international with a long history of striving for innovation in engineering.

The development of hydrogen fuel cell systems that can flexibly suit a number of heavy-duty applications is an especially advantageous move in sectors with expensive vehicles where it makes more sense to convert the vehicles to different drive systems than to rebuild whole fleets from scratch – while this is of course also possible with Voith drive systems. For this reason, Hyzon Motors is also offering fuel cell drive systems for the conversion of heavy-duty vehicles, to save fleet operators the cost and currently very long wait for new vehicles to completely renew their fleets.

Alexander Denk, Vice President PM E-Mobility at Voith Turbo says on the company’s website: “We don’t want to stand in the way of manufacturers’ in-house developments.” He explains: “That’s why we can also just supply them with individual system components if they so desire.

Not only is Voith involved in drive systems for buses, trucks and other heavy-duty vehicles, but the company is also well established in marine drive technology – including electric systems – where the extra energy density of fuel cell technology is being rapidly taken up in the hard-to-decarbonise sector on account of the great distances and loads of heavy-duty marine vessels.