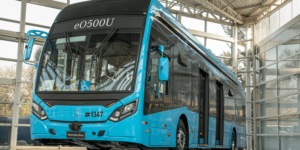 Daimler Truck is expected to start assembling the first Mercedes-Benz electric bus in Brazil in November or December this year. The manufacturer sees great sales opportunities in one city in particular.

The start of production was announced by Walter Barbosa, Head of Marketing and Sales at Mercedes-Benz in Brazil. Last year, the manufacturer had presented a locally developed electric bus chassis called eO500U in Brazil. The company expects demand for electric buses in Brazil to increase from just over 1,000 in 2023 to 3,000 vehicles in 2024.

Most e-buses in Brazil are on the road in the metropolis of Sao Paulo: the city already plans to use 2,600 electric buses by 2024. The Chinese manufacturer BYD is already big in the business, along with several importers – and soon Daimler Truck with an electric bus developed and built in Brazil.

The eO500U has a range of 250 kilometres and is powered by two electric motors. A charging process is said to take between 2.5 and three hours. Reuters, citing the company, writes that a vehicle will cost 3 to 3.5 times as much as a comparable diesel bus – but the exact price was not mentioned. In the earlier report, a factor of 3 to 4 was already mentioned, Mercedes reckons with an amortisation of the investment costs after 13 years.