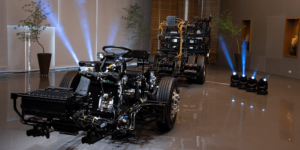 Mercedes-Benz has presented a locally developed electric bus chassis in Brazil called eO500U. It features a low-floor design and can accommodate bodies up to 13.2 metres long. The chassis is expected to offer a range of 250 km and will be available from 2022.

Mercedes-Benz is primarily targeting markets in South America with the electric bus chassis, but it will also be imported to Oceania and Europe from Brazil, according to an accompanying statement. To develop the project at subsidiary Mercedes-Benz do Brasil, the car company has allocated 100 million reais (the equivalent of around €16.2 million) from its current investment cycle (2018 to 2022). Two prototypes of the chassis were initially built and tested in Germany, the series product is to be developed in Brazil and launched on the market in 2022.

The following is known about the specifications: The eO500U chassis is a standard 4×2 model of Mercedes-Benz’ O 500 series. It can carry said bodies up to 13.2 metres long and is expected to carry 83 passengers. The electric motor is integrated into the rear axle, although Mercedes-Benz does not give any details about either the engine power or the battery. Regarding the charging time, it only says that “the plug-in system corresponds to the technological standard that Daimler uses in its electric buses” and that three hours are needed to fully charge the battery.

The manufacturer has not yet mentioned the price. However, the Brazilian portal Noticias Automotivas reports that the price will be “three to four times the price of a chassis with a diesel engine” and that Mercedes-Benz expects the investment costs to be amortised after 13 years.

Noticias Automotivas also states that initially 150 to 200 E-buses based on the chassis are to be delivered per year to the Brazilian metropolis of São Paulo alone. In principle, Mercedes-Benz do Brasil wants to offer customers comprehensive advice on the application and use of the new technology, the charging infrastructure and fleet management. There is talk of an “ecosystem that also includes exclusive services for electric vehicles” and is intended to cover the entire life cycle of the vehicles.

The development of Mercedes-Benz’ E-bus chassis in Brazil is no coincidence. Mercedes-Benz do Brasil is home to Daimler’s global competence centre for the development of the brand’s bus chassis. According to the manufacturer, the eO500U chassis was developed for Brazilian conditions after extensive testing in Germany, where Daimler’s expertise in electric buses could be drawn upon.

Mercedes-Benz will not be the first manufacturer to produce e-buses in Brazil, however. Chinese competitor BYD opened a plant in Campinas back in 2015. Since then, the company has been manufacturing chassis for electric buses locally. There have been several local projects since then. For example, BYD handed over nine electric rubbish trucks to Rio de Janeiro’s municipal cleaning company in autumn 2019 and delivered 15 BYD D9W vehicles to São Paulo at the end of 2018.

Then, in spring this year, BYD unveiled its first electric articulated bus manufactured in Brazil. By October, the manufacturer, together with partner Marcopolo, plans to deliver twelve examples of the articulated electric bus for use on Brazil’s first all-electric bus corridor in São José dos Campos.

In the context of the burgeoning electric bus manufacturing in Brazil, BYD also commissioned a new lithium iron phosphate battery factory locally last year. The new production facility in Manaus, the capital of the Brazilian state of Amazonas, can manufacture 18,000 LiFePO4 battery modules for electric buses annually. With the local production of battery modules, BYD wants to position itself early on the eMobility market in Brazil and Latin America. The electrification of bus fleets is still a niche market there, but the potential is great, as can be seen from the ZEBRA project, among others.

Mercedes eCitan to release in 2022