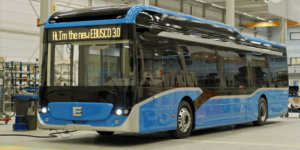 The Dutch electric bus manufacturer Ebusco wants to start production in France next year. For this purpose, the company is renting an area of 21,000 square metres on the site of the Renault plant in Cléon.

Ebusco says it will invest around 10 million euros in conversion and equipment in Cléon to prepare for the production of the e-buses there. Cléon is located on the Seine northwest of Paris – between the capital and the coast to the English Channel. In addition to production, the French headquarters of the company will also be located at the site.

The new Ebusco factory is expected to be fully operational by the end of 2023 and will have an initial capacity of 500 buses per year – with the option to expand capacity in later years.

Renault plans to completely convert the Cléon site to the production of electric vehicles in the coming years, and Ebusco also wants to benefit from the ecosystem created in the surrounding area for this purpose. For its part, the Dutch company says that it will not only contribute its experience with the electrification of public transport, but also its “in-depth knowledge of the integration of lightweight materials in the unique bus design”.

It is not clear from the announcement which models Ebusco intends to build in France. The explicit reference to lightweight materials could be a hint at the Ebusco 3.0, which is supposed to stand out from other e-buses precisely because of its lightweight design and thus lower energy consumption.

“After the establishment of a development team in France two years ago, the installation of a second production site in Europe, as well as a new headquarters for our French subsidiary, is an important step for Ebusco in its development in France and Southern Europe,” says Peter Bijvelds, CEO of Ebusco. “France represents the largest bus fleet in Europe and is therefore a strategic market for the development of Ebusco. With this new local production facility we aim to enhance our service to our existing French clients and gain further traction with new French mobility authorities.”

“The challenges linked to job creation, attractiveness, and low-carbon mobility in the Rouen-Normandy metropolitan area naturally led us to agree to host Ebusco on our grounds,” says Thomas Denis, CEO of Renault’s Cléon plant. “This expansion project in France of Ebusco is a great opportunity to promote Normandy, the know-how around the electrical industry and boost the local industrial fabric.”

Series production of the Mercedes-Benz eEconic starts in Germany