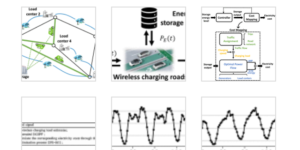 Researchers were able to demonstrate in a simulated study that an efficient control of the energy storage system in the wireless charging road both reduced the energy costs as well as the load on the existing electricity grid.

Technically, the proposed framework is composed of three major modules: the hybrid traffic assignment, the extended DCOPF, and the controller. The hybrid traffic assignment calculates the traffic flow with given trips across a road network composed of wireless charging lanes and normal traffic lanes. The optimal electric energy flows between the generation resources, load centers and wireless charging roads in the given power grid is determined by extended direct current optimal power flow (DCOPF).

On matters of inductive, or wireless charging, the Israeli company ElectReon is also right at the forefront. Last month, the wireless charging specialists signed a memorandum of understanding for the sale of its wireless EV charging services to CTG, the largest operator of limousine fleets and unique shuttle services in the New York and Las Vegas area. ElectReon has not only found popularity for their inductive charging technology with fleet operators: most recently, Stellantis & Iveco used the wireless charging technology in tests, while the Smartroad project in Gotland continues to expand. ElectReon’s first contract came for a bus charging system in their native Tel Aviv.

In Cornell study just published, the focus was on simulations of multi-lane roads with some lanes embedded with wireless charging and energy storage systems. The study summarised: “Wireless charging roads equipped with energy storage systems are promising electric vehicle charging solutions by virtue of their strong advantages in time saving and reduced pressure on the existing power infrastructure.”

Now, with this study, the wireless charging of moving vehicles on multi-lane roads has taken a step towards reality. Jie Shi, lead author of the Cornell study said: “Our control strategy is computationally efficient and requires no forecasts of the system states, making it appealing to practical applications.”