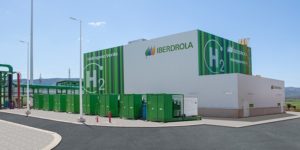 Iberdrola and BP have announced a strategic alignment to advance electric vehicle charging infrastructure. The partners earmarked €1bn for deploying up to 11,000 fast charge points across Spain and Portugal. Up to 600ktpa production capacity of green hydrogen is the next target, also including the UK.

Iberdrola and BP speak of “large scale green hydrogen production hubs in Spain, Portugal and the UK” and add they were open to other geographical areas. The green hydrogen is to help the industry make the energy transition, state the partners.

As for battery-electric vehicles, the plans appear concrete. Iberdrola and BP plan to form a joint venture to invest above one billion euros to roll out 11,000 rapid and ultra-fast charge points across Spain and Portugal.

The plan includes installing and operating 5,000 fast charge points by 2025 and up to 11,000 by 2030, though, counting Iberdrola’s existing network. The companies are also looking to jointly serve EV customers in the UK, likely through BP’s networks.

Iberdrola operates over 2,500 points in Iberia and claims users can access over 100,000 recharging points throughout Europe via its app.

BP offers access to its European network of over 10,000 charge points, mainly in the UK and Germany.

In Spain and Portugal, the petrochemical company expects to use its existing network of 1,300 petrol stations also to install charge points under the new agreement.

Iberdrola Chairman Ignacio Galán said “we intend to help advance in the decarbonization and energy self-sufficiency through the electrification of two key sectors of our economy, transport and industry. The scale of this challenge requires alliances between companies such as Iberdrola and BP, which have the technology and knowledge necessary to help accelerate Europe’s industrial development.”

BP’s oil and gas industry background also forms the backdrop to the “green” hydrogen deal, which will create a separate joint venture. The company’s hydrogen project at BP’s Castellón refinery will be part of the agreement. The two companies and the Instituto Tecnológico de la Energía have submitted the Castellón project to the Spanish government’s hydrogen value chain PERTE call. Other hubs are also to integrate with renewable energy.

Bernard Looney, CEO of BP expects the strategic agreement with Iberdrola “to become a clear example” of complementary expertise and capabilities for renewables and large engineering projects.

Iberdrola and BP aim to finalize both joint ventures by the end of this year, subject to regulatory approvals.