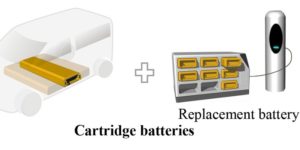 Japanese courier service Yamato Transport and the Commercial Japan Partnership Technologies Corporation (CJPT) have announced that they will work together to standardise replaceable and rechargeable battery cassettes for commercial electric vehicles.

The CJPT is a joint venture between Toyota, Hino and Isuzu established last April to advance so-called CASE (Connected, Autonomous, Shared, Electric) technologies in the commercial vehicle sector. In the field of electric mobility, the “joint venture”, which is 80 per cent owned by Toyota and ten per cent each by Hino and Isuzu, aims to jointly develop BEV and FCEV commercial vehicles. As was said at the time, the main aim was to reduce costs.

This is exactly what Toyota also cites in the current announcement on the Yamato cooperation. “The company envisions that commonizing cartridge batteries and recharging systems for vehicles ranging from BEV mini-commercial vans to BEV light-duty trucks will reduce the cost of commercial BEVs and encourage their widespread use,” the Japanese company wrote. In the future, the CJPT wants to promote the development of electric commercial vehicles with exchangeable batteries.

Toyota cites mostly familiar arguments as advantages of the concept: The acquisition costs of the vehicles are reduced, the effort for the installation of charging infrastructure is minimised. In addition, power peaks are avoided during the (simultaneous) fast charging of several vehicles, as the spare batteries can be charged gently and evenly while the vehicle is on the road with another battery. In the case of logistics operations, there is also the fact that the downtime during charging is reduced or eliminated by replacing the batteries.

One point that Toyota does not mention in its communication: If a replacement battery is still needed for each vehicle, the raw material requirement of such an exchange system increases. However, with an exchange system, the batteries could become somewhat smaller again.

The technical key data the partners are aiming at for the exchange batteries or battery cassettes, as it is called in the communication, and how long the development is to take, is not yet mentioned. A graphic published with the announcement shows a kind of delivery van with three battery cassettes placed transversely in the vehicle floor – at this size, the battery packs would probably have to be exchanged by a robot.

The logistics company Yamato Transport is already working on a green ecosystem for delivery transport that also includes its transport and delivery partners. Together with local municipalities, a system for electricity use is to be developed that includes the use of exchangeable battery cassettes.