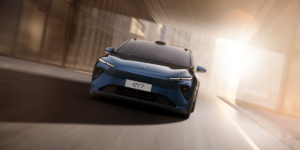 The Chinese electric carmaker has confirmed its earlier timetables, according to which the first vehicles with the 150 kWh solid-state battery will be delivered this year. There will also be flexible upgrades for existing Nio customers via the company’s battery swap stations.

The 150 kWh pack uses so-called semi-solid-state battery cells, which Nio sources from the Chinese manufacturer WeLion. WeLion is currently building a factory for hybrid battery cells with solid and liquid electrolyte as well as for pure solid-state battery cells in Zibo in the eastern Chinese province of Shandong. This factory is scheduled to go into operation at the end of the year – this could fit in with the Nio timetables, but large quantities are probably not to be expected initially.

The semi-solid-state cells have a solid electrolyte, an anode material made of a silicon graphite composite and a cathode with an “ultra-high” nickel content, as the CN EV Post writes. WeLion itself had stated that the battery would have an energy density of 360 Wh/kg.

Originally, the 150 kWh pack was announced for the ET7 electric sedan, for which the statement was also made that delivery would begin in Q4 2022. In the ET7, an NEDC range of over 1,000 kilometres should be possible with the battery. In Nio’s large electric SUV, the ES8, it should still be 850 kilometres according to the NEDC, and 900 kilometres in the smaller ES6 SUV model.

Since all Nio models are compatible with the company’s own battery swap technology, customers can also swap the ordered battery model afterwards. Initially, this was not possible; only batteries of the same type could be exchanged. However, after a pilot project, Nio announced in December 2021 that customers can upgrade their battery packs monthly as needed. Currently, there are packs of 70, 75 or 100 kWh.

What the upgrade to the new 150 kWh battery will cost and how quickly these battery packs will be available in the exchange stations is not yet known.