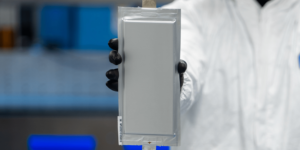 The factory in Zibo in the province of Shandong, East China, will produce 100 GWh in battery cells a year once it runs at total capacity. The first expansion phase is scheduled to come on stream this year and have an annual capacity of 20 GWh. WeLion did, however, not disclose a date for completion.

At the same time, there may be a client indeed expecting timely delivery. WeLion is rumoured to supply Nio with battery cells. Nio had announced a 150 kWh solid-state battery version when unveiling the ET-7 in early 2021. The targets at the time saw 150 kWh for about a thousand miles coming in by late 2022. However, Nio boss William Li clarified a little later that it would be a semi-solid-state battery.

At the same time, Nio never confirmed nor denied WeLion as their supplier. Reports at the time cited unnamed investors claiming Nio had provided significant resources to help WeLion deliver the battery on time. Pointing further to a partnership, Zeng Shuxiang, CEO of XPT, NIO’s electric drive division, appears a director of WeLion.

Nio generally offers drivers to buy or rent the battery as it operates a growing network of battery swap stations, predominantly in China. There Nio recently marked opening its 800th hub for swapping the power packs.

WeLion was founded in 2016 and is based in Beijing. The Municipal Government also recognises the company. Their 2022 Work Report, posted on the city government’s website, showed that Beijing would promote the construction of the first phase of WeLion’s solid-state battery project, possibly through funding or permits.

The project has a total investment of RMB 40 billion ($6.3 billion), of which RMB 10.2 billion was invested in the first phase. The facility will cover 366,666 square meters of land.

It has officially been confirmed that WeLion will supply the semi-solid-state battery for the Nio ET7. As WeLion’s founder and chief scientist Li Hong explained at the China EV 100 forum, the battery with an energy density of 360 Wh/kg and a capacity of 150 kWh in the Nio ET7 should allow a range of 1,000 kilometres according to Chinese standards. Series production of the battery will start at the end of this year or in the first half of next year, he said.

Chinese battery manufacturer WeLion, which supplies the semi-solid-state battery for the Nio ET7, has ordered 30,000 tonnes of high nickel content cathode material from battery materials supplier Ronbay Technology for the period 2022 to 2025.

Previously, Ronbay Technology and WeLion signed a strategic cooperation agreement to work together in the field of solid-state batteries and materials. This involves both hybrid solid-liquid lithium-ion batteries and all-solid-state lithium batteries. The research cooperation is scheduled to run until April 2027.

It also stipulates that WeLion will use partner Ronbay as the first supplier of cathode materials with high nickel content – so it is very likely that the 30,000 tonnes now ordered will be used for the semi-solid-state cells.