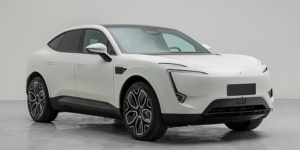 The Chinese electric car subsidiary Avatr under Changan, Huawei and CATL has launched its first model on the Chinese market. The coupé-like electric SUV Avatr 11 is based on a 750-volt platform and is available in three regular versions with prices starting at 349,900 yuan.

All versions are equipped with four-wheel drive with two engines. The power storage system is a cell-to-pack battery from CATL in two variants for ranges of 555 and 680 kilometres according to the Chinese standard (CLTC). The battery voltage is probably 750 volts, and it should be possible to recharge the battery for 200 kilometres in ten minutes.

While Changan will contribute the automotive know-how and CATL the battery technology, Huawei will be responsible for the software for autonomous driving and the intelligent functions in the cockpit. As a strategic partner, Huawei is heavily involved in Avatr’s technological development, although it does not hold a stake in the carmaker, Avatr CEO Tan Benhong said in June when the cooperation with Huawei was announced.

Deliveries of the two cheaper variants are scheduled to begin in December 2022. The top-of-the-line model is expected to follow in the first quarter of 2023.

Earlier this week, Avatr had also announced an important charging cooperation. Together with BP, the company will build 100 HPC stations in 19 cities in China. Each column is to have a capacity of up to 480 kW or 2x 240 kW.

Mercedes launches production of the hybrid Hypercar One