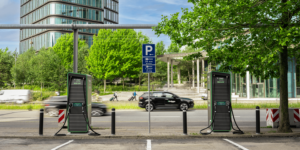 The Danish company set the timeline over the next three to four years as part of its European expansion plan and has already started installing charging stations.

Viggo opened its third and largest high-power charging hub near the central station in Copenhagen. It comprises five charge columns delivering up to 300 kW.

“This central Copenhagen hub is our 3rd and so far biggest hub – and it lays the foundation for our future European expansion,” said Kenneth Herschel, Viggo CEO.

The charging subsidiary ViggoEnergy allows roaming via Hubject so that any EV driver may access the Viggo charging stations.

While the company did not disclose details on the charging stations other than capacity, other news saw ViggoEnergy work with charge point operator Spirii. Following our request of information, Viggo confirmed that Spirii was their charge point operator. The company was founded in 2019, focusing on offering an open charging platform to other companies, first in Denmark.

Viggo also launched in Copenhagen in the same year and has exclusively zero-emission cars in its fleet. In September 2021, the company added three Toyota Mirai fuel cell vehicles for the first time and upon entering Oslo, Norway.

The company offers rides at a fixed price displayed in the app, like Uber. Viggo calculates the cost at the time of booking based on the amount of traffic and the expected time the ride will take. There is also the option to book an electric cab and driver at an hourly rate.