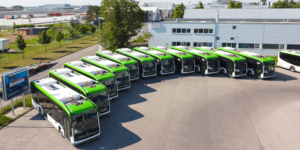 In Austria, Österreichische Postbus AG has put eleven new Mercedes-Benz eCitaro electric buses into operation. The eCitaro are being used by the Verkehrsverbund Ost-Region (VOR) in the southern Weinviertel region of Lower Austria.

Eight buses are to be operated on two lines, while the batteries of two other electric buses are to be charged in barely 30 minutes with up to 300 kW via fast charging, which avoids “unproductive downtime”. Overnight charging takes place at three different bus depots in the area. The charging locations are currently being built by EVN on behalf of the VOR and are scheduled to go into operation before the end of August.

The equipment of the buses includes, among other things, a wheelchair space, a folding ramp at door two, an enclosed driver’s cabin, a passenger counting system and two TFT monitors for passenger information. In addition, the eCitaro are equipped with the real-time communication module Bus Data Center from Omniplus ON. This is intended to enable all operating states of the vehicle, such as the charging status, the remaining range, the batteries and all diagnostic messages to be constantly monitored from the control centre. ÖBB Postbus is even going one step further and integrating the vehicle data from the Daimler Bus Cloud into its own fleet management systems.

In the last ten years, Postbus AG has added a total of 579 Mercedes-Benz buses to its fleet, but these will be the first purely electric buses from Mercedes-Benz in regular service on Austria’s roads.

In addition to Mercedes buses’, Postbus has been purchasing electric and hydrogen fuel cell buses from Solaris. In February, the Polish bus manufacturer signed another framework agreement with Österreichische Postbus AG for the delivery of up to 82 hydrogen-powered Urbino 12 hydrogen and up to 24 battery-electric Urbino 9 LE electric. Potential orders are to be placed in the period 2022-2025, with an extension option to 2028 also agreed. The last framework agreement between Solaris and Österreichische Postbus AG, dated February 2021, reportedly included delivery of up to 40 Urbino 12 hydrogen.