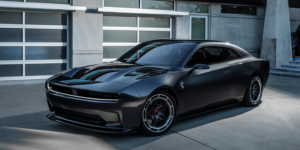 A day after unveiling its first electrified model, the Hornet compact SUV, which is also offered as a PHEV, Stellantis brand Dodge is offering a first glimpse of the Charger’s all-electric future.

The glimpse comes in the form of the Dodge Charger Daytona SRT Concept, which features an 800-volt drive system called Banshee. Unfortunately, Dodge is not yet giving any details on the performance data.

Based on the statement about the 800-volt system voltage, however, it is clear that the Charger will use the so-called EDM3 drive unit from Stellantis – because there is only an 800-volt version of this Electric Drive Module (EDM). The smaller EDM1 and EDM2 are 400-volt-only units. The EDM3 can produce between 150 and 330 kW per motor.

Since at least the study now shown has an all-wheel drive, two of the EDM3s will probably be installed. However, whether up to 660 kW of power is actually possible will no longer depend purely on the drive units, but also on the battery. The battery will depend on whether the Charger is based on the SLTA Medium or SLTA Large – which Dodge has not yet confirmed. STLA Medium is designed for 87 to 104 kWh, STLA Large for 101 to 118 kWh.

However, with Charger-unique all-wheel drive, it should be possible for the car to be faster than a Charger SRT Hellcat “in all key performance metrics.” The supercharged V8 model produces 594 kW and can accelerate to 100 km/h in 3.6 seconds.

At the very least, Dodge has equipped the Charger Daytona SRT Concept show car with a special feature. Called “eRupt,” the component is a multispeed transmission with an “electromechanical shift experience that is pure Dodge,” according to the release.

The next generations of the Charger and Challenger, expected starting in 2024, will reportedly be launched exclusively with battery-electric powertrains. However, the recently unveiled first electrified Dodge is not an in-house development: The Hornet is based on the Alfa Romeo Tonale.