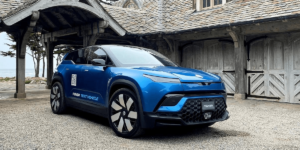 The electric car startup Fisker has announced that it is considering increasing production at contract manufacturer Magna in Graz beyond the previously planned 50,000 units per year from 2024 due to the high level of interest in its Ocean electric SUV. In addition, Fisker is looking into producing the Ocean in the US.

The US plans, which the company mentions in a statement, are also likely driven by the requirement of the reformed US tax credit to final assemble the cars in North America – cars imported into the US from Graz are no longer eligible.

However, Fisker does not specify what exactly the US plans are. What we do know is that the company wants to keep its own organisation as lean as possible and therefore does not have its own plants. Therefore, as is well known, the Ocean is produced at Magna in Austria. For the US production of the electric SUV, manufacturing at Foxconn in Lordstown would be conceivable – Fisker is already cooperating with the contract manufacturer for the second model ‘Pear’, which is to be built in the factory in Ohio. What speaks against this is that the Ocean is based on an electric vehicle architecture from Magna. So it is also possible that the Canadian company will build the Ocean for Fisker in its own plant in North America.

As far as the possible increase in production in Graz is concerned, Fisker does not give any concrete figures in its current announcement. However, as reported, company boss Henrik Fisker had expressed confidence in an interview in May that Magna could triple production of the Ocean to 150,000 vehicles from 2024.

The special edition ‘One’, limited to 5,000 units for the start of production, sold out within 30 days in July. According to the company, the waiting list for a copy of the special model is more than 1,000 long, should the original buyer not buy. There are currently more than 58,000 reservations for the non-limited series models, which is equivalent to more than a year’s production – but these are only reservations, not binding purchase contracts.

Recently, Magna had completed the first 55 prototypes of the Fisker Ocean, which will now undergo various final tests before series production is scheduled to start in Graz on 17 November 2022. In July, Fisker poached Alpay Uguz from BMW to oversee global manufacturing at the electric car start-up and realise its goal of producing a total of one million electric vehicles annually by 2027.

Smart announces Brabus-tuned version of the #1