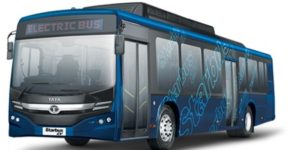 While Tata does not disclose much about it, the larger order comes from West Bengal. The operator ordered more than 1,180 electric buses of four different types, including 12-meter low-floor AC, standard floor non-AC, and smaller nine-metre-models.

With the electric buses expected to start to arrive in 2023, WBTC will primarily deploy zero-emission solutions across Kolkata (formerly known as Calcutta).

The second new order for 921 electric buses from the Bengaluru Metropolitan Transport Corporation exclusively holds twelve-metre-long low-floor buses with electric drives from Tata. The vehicles will be used in the southern Indian metropolis for twelve years.

The 12-metre bus is Tata Starbus and offers space for 35 passengers. The electric motor has an output of 245 kW with a battery pack of “around 250 kWh”. Tata claims it was also “scalable according to range requirements”.

As with the previous order from Delhi for over 1,500 Tata electric buses, both WBTC and BMTC participated in the ‘Grand Challenge’ of Convergence Energy Services Ltd. They aggregated a tender for several thousand e-buses in India’s largest cities.

CESL is the government agency for procurement and deployment of electric vehicles, including electric buses, across all government and state-run units to ensure vehicle standards and operational compatibility across States.

The initiative claims to have aggregated tenders for 5,450 electric buses in five cities, including Bengaluru, Delhi, Surat, Hyderabad and Kolkata. This means they are on target, as announced in January this year.

With today’s orders, Tata Motors has won tenders for over 3,600 units of electric buses in no more than a month.

The company has supplied more than 715 electric buses across multiple cities in India, which have clocked more than 40 million kilometres to date.