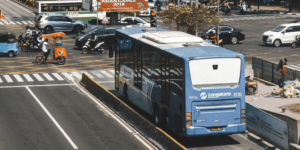 The Indonesian public transport operator Transjakarta has started a project to convert existing diesel buses to electric drive. For this purpose, the bus operator in the Indonesian capital Jakarta has signed an agreement with VKTR Teknologi Mobilitas and Equipmake. Initially, a number of buses will be converted as prototypes to be tested by Transjakarta.

If the pilot project is successful, Transjakarta plans to commission the conversion of its 3,000 existing diesel buses, according to the news site Jakartaglobe, citing a statement by Yana Aditya, president of the bus operator. “This will be a defining moment in the history of electrification of public transport in Jakarta,” he commented.

According to the report, commercial vehicle electrification specialist VKTR, a subsidiary of Bakrie & Brothers, is to carry out the project with technological support from UK-based electric drive provider Equipmake. In addition, VKTR is responsible for the installation of battery charging stations along the Transjakarta routes.

It is not clear from the report what technical benchmarks the converted buses are expected to achieve.

“Under the agreement, Transjakarta will provide conventional buses with internal combustion engines, which will be converted into electric buses by VKTR,” explained Gilarsi Setijono, president director of VKTR. The conversion will be implemented in the coming months. “Together with Equipmake, we will convert the buses for the field test in the next three months,” he said. The report does not say when the practical test is expected to be completed. Nor does it say how many battery charging stations will be built along the Transjakarta routes.

Transjakarta had put its first 30 BYD electric buses into service in March and reportedly plans to have a total of 10,000 electric buses by 2030. According to information from last year, at least 50 per cent of all Transjakarta buses will be electric by 2025. The Indonesian government has been promoting electric mobility both on the roads, as well as in manufacturing within the country, making the most of the country’s significant nickel resources.