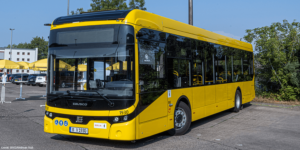 Berlin’s public transport operator BVG has released information on the incoming new e-buses. The first of 89 Ebusco 2.2 electric buses will join the Berlin fleet this year. Once these arrive in the German capital, the BVG fleet will include 228 electric buses in active service.

BVG plans to convert its city bus fleet of 1,500 vehicles to electric drives by 2030 and has already ordered several batches of electric buses. The order with Ebusco in December was the latest one and included the most modern models in the fleet and an option for a further 60 Ebusco 2.2 buses.

As with their predecessors, BVG charges the new buses at the depot. However, this time, the depot is equipped with a new grid-friendly and space-saving system by Hitachi, as reported.

In the Ebusco 2.2 buses for Berlin, the usable capacity of the LFP battery is 419 kWh, which, according to the manufacturer, allows the buses to travel 290 kilometres on a single charge. “This is a significant advancement,” the BVG statement reads since buses in the existing fleet only manage around 150 kilometres.

Germany’s Minister for Transport Volker Wissing attended the launch in Berlin. He confirmed the government’s goal “to have 50 per cent of city buses running on alternative, climate-friendly drives by 2030.” The BMDV continues to count natural gas among alternative drive systems.

The federal and state governments are providing significant funding. The approved budget for the 90 new vehicles and charging infrastructure makes BVG the largest beneficiary, followed by Hamburg reportedly.

In today’s update, the operator said current funding totalled around 52 million euros for decarbonising the BVG bus fleet, including the 138 electric buses already procured. BVG is covering the costs it would have paid for comparable diesel buses.

The new vehicles will serve routes in southern and western Berlin for the first time. The corresponding charging infrastructure for 30 e-buses each is currently being built at the Britz and Cicerostrasse depots.