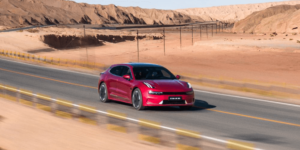 Only about three months after the start of production, Geely’s premium electric brand Zeekr has reported the production of the 10,000th unit of its debut BEV 001. In addition, further details about the production technology at the Ningbo plant have been revealed.

Production of the Zeekr 001 only started in mid-October at Geely’s Ningbo plant. In early January, it was revealed that Zeekr had delivered 6,007 units of the 001 in China in 2021 – less than two and a half months – including 3,796 in December.

In January, Zeekr has now apparently cracked the 4,000 mark, when total production will reach five figures. In 99 days, Geely has scaled Zeekr production from zero to 10,000 vehicles. But the 20,000-unit mark is likely to be reached much sooner: Zeekr announced that it will now ramp up production gradually to avoid long delivery times. Geely has reportedly set a target of 70,000 units for 2022 – measured against the presumably around 4,000 units in January, that would mean an average of 6,000 vehicles for the remaining eleven months of the year.

Soon, demand could increase further, as it is known that the Zeekr 001 will also be offered in the EU from 2023. By 2025, the brand wants to expand its range to seven models and export a total of 100,000 vehicles.