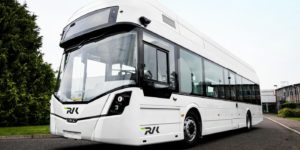 The first 20 Solaris H2 solo buses are to be delivered at the end of this year and gradually integrated into the RVK fleet. As a public transport operator, RVK is already familiar with the Urbino 12 hydrogen model from Solaris.

Wrightbus is a new manufacturer to RVK fleet where the new electric buses will join the existing number of 52 hydrogen fuel cell models Van Hool and Solaris. The first 20 H2 solo buses from Wrightbus are scheduled for delivery at the end of 2023.

The contract between the German public transport operator and the Northern Irish bus manufacturer involves up to 60 Kite Hydroliner hydrogen fuel cell buses. These have been “adapted to German conditions” – i.e. left-hand drive with doors on the right-hand side of the vehicle.

The model offers space for up to 90 passengers and uses ZF axles. The fuel cell is a Ballard FCmove with 70 kW. Depending on the version, the buffer battery holds 30 or 45 kWh. A special feature of the model is the variety of tank systems: even the smallest version with four cylindrical pressure tanks (350 bar) can hold 32 kilograms of hydrogen. Wrightbus says the maximum configuration with seven tanks is up to 50 kilogrammes of H2 which should enable 640 miles of range, which is around 1,030 kilometres. That said, the Northern Irish company has not specified which tank configuration the German customer RVK has chosen.

“RVK already has a substantial hydrogen fleet so for them to order from Wrightbus and recognise us as a leader in the sector is hugely gratifying and a testament to the reputation we’ve built up in the zero-emission sector,” said Wrightbus CEO Jo Bamford. “This deal is significant for us in many ways. Not only is it our first European contract since I took over, it’s our second international contract in quick succession, and it shows that Wrightbus has a big role to play on the global stage.”

“Thanks to the funding from the Federal Ministry of Digital Affairs and Transport and the speedy tendering process, we are making great strides towards our goal of zero emissions,” said Marcel Frank, managing director of RVK. “We are looking forward to the delivery of the Solaris buses soon and to gaining new experience with Wrightbus as another manufacturer – this is of great importance in the conversion of our fleet.”

RVK has not revealed when a decision will be made on whether it will order the optional buses from Solaris (20 vehicles) and Wrightbus (40 vehicles). The public transport provider has said it expects to test the first articulated hydrogen buses in the fourth quarter of 2022.