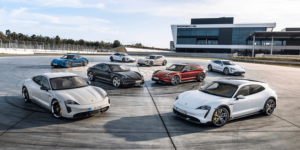 Porsche is readying a second generation of the triumphant Taycan EV in 2027, then pairing it with an all-electric Panamera. Volkswagen’s premium brand is executing its new “electrified luxury” plan, which will see six EVs by the end of this decade.

But first to the Porsche Taycan and Panamera – the next-gen models will utilise Volkswagen’s Scalable Systems Platform (SSP). However, they won’t be the first Porsche EVs on the SSP at launch in 2030. Porsche announced an E-SUV positioned above the Macan and Cayenne SUV models for 2024.

The new electric Porsche codenamed K1 will roll off the lines in Leipzig, just like the electric Macan, also set to debut in 2024 – after Porsche had postponed the launch due to the software problems inherited from Volkswagen. The electric Macan will use the Premium Platform Electric (PPE) developed with Audi.

Based on the PPE, Porsche is also planning said all-electric Cayenne for 2025, according to Autocar. The report does not mention the Porsche 718 sports car, which will be exclusively electric by mid-decade, as Porsche confirmed in March.

At the time, then-only Porsche boss Oliver Blume had already hinted at the brand’s “electrified luxury” strategy. He said Porsche was “primarily targeting the higher-margin segments” and that the Taycan had already shown “that customers are willing to spend more money on electric cars”.

As for the SSP, although available to more volume-driven Volkswagen brands, Porsche says their version will include brand-specific elements. Autocar lists a low cabin floor, courtesy of a slimline battery pack, and rear footwells (or foot garages, as they’re known at Porsche) similar to those of the J1 platform used by the existing Taycan as “key architectural developments” being pushed by Porsche.

The electric Panamera will be sold alongside today’s combustion-engined and plug-in hybrid models, based on Porsche’s MSB platform.

The Panamera EV is still in early-stage development. Autocar sources suggest that it will have a wheelbase and overall length similar to the long-wheelbase Panamera currently sold in China (3100mm and 5199mm). That size rivals the likes of the Mercedes-AMG EQS 53 and Lucid Air.

Other suggested details include a choice of a single or dual-motor drivetrain and a further-developed 800V battery with a more energy-efficient cell technology and a higher-silicon-content anode than that of Porsche’s today, according to Autocar sources.