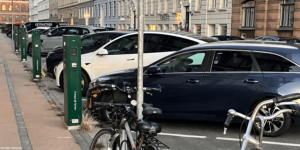 Danish CPO Clever has asked Germany’s Compleo Charging Solutions to supply AC charging stations. The deal is a follow-up order from a tender Compleo won in 2021. Clever aims to install a far-reaching AC charging network in Denmark with potential more sales to come.

Clever plans to install 9,000 new public charging stations by 2025. Compleo will now deliver more stations from 2023 and emphasised that they were the leading supplier for this second instalment without detailing actual numbers.

However, the Compleo-Clever relationship reaches back to 2013. Clever claims it provides almost 60 per cent of the charging infrastructure in Denmark, with 40 per cent of this share supplied by Compleo. Large order volumes were also a reflection of the market growth in Denmark, Compleo said at the time.

They also share a familiar partner in E.On. The German utility and Clever have built high-power charging infrastructure on motorways in Denmark, Norway, and Sweden through their Ultra Fast Charging Venture Scandinavia joint venture since 2019. Already 28 of a planned 48 sites have received funding through the EU’s Connecting Europe Facility (CEF) programme.

Clever AC network in Denmark in the making

The now renewed cooperation with Compleo Charging Solutions establishes an AC charging network in Denmark, which goes back to 2021, as reported. “We are proud of our continued partnership with Clever,” said Alfred Vrieling, VP of Sales & Marketing Europe at Compleo. “This shows that our technology and our products are also the ideal solution in an international context.”

“In particular, the company’s commitment to the continuous development of charging station technology and its services as a manufacturer make Compleo an attractive supplier for us,” replied Casper Kirketerp-Møller, CEO of Clever.

The company opted for Compleo’s Duo charge column, which has two AC charge points delivering 22 kW. The company also stressed that they would add customised features for Clever in Denmark. Moreover, the Duo version to be delivered will be ISO 15118-ready so Clever can update to Plug & Charge in the future.