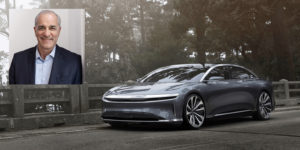 US electric carmaker Lucid Motors is losing several high-ranking executives, including production chief Peter Hochholdinger, amid its struggles to ramp up production of its debut Lucid Air model.

As Business Insider reports, citing current and former Lucid employees, Peter Hochholdinger, who joined Lucid in 2019 from Audi and later Tesla, is leaving. According to the report, he joins at least five other high-level manufacturing and logistics executives who have left the US automaker in recent weeks.

Hochholdinger continues to be referred to as Lucid Motors’ Head of Production on Lucid’s website and his LinkedIn profile to date.

The California-based electric car company has recently had to scale back its 2022 production target again. Instead of 20,000 Lucid Air this year, Lucid gathers it will only produce 6,000 to 7,000 units of the electric sedan. The reason given in the Q2 annual report was “extraordinary challenges in the supply chain and logistics.” In March, Lucid decreased from 20,000 to 12,000 to 14,000 units.

To reach 6,000 to 7,000 vehicles, the company will need to increase production by the end of the year significantly: Lucid produced 1,405 cars in the first half of the year, according to the quarterly report. “We’ve identified the primary bottlenecks, and we are taking appropriate measures – bringing our logistics operations in-house, adding key hires to the executive team, and restructuring our logistics and manufacturing organization,” said Peter Rawlinson, CEO and CTO of Lucid, at the Q2 annual report. “We continue to see strong demand for our vehicles, with over 37,000 customer reservations, and I remain confident that we shall overcome these near-term challenges.”

Lucid’s second quarter revenue was $97.3 million. CFO Sherry House indicated that Lucid had $4.6 billion in cash, which she said was “sufficient to fund the company well into 2023.”

Just recently, Lucid Motors also unveiled a new performance subsidiary called Sapphire. The first vehicle of this new brand is to be a three-motor variant of the ‘Air’ electric sedan. The initial plan is for a limited series for the US and Canada starting in the first half of 2023 at prices of $249,000 and CAD 325,000, respectively. Lucid also plans to offer Sapphire offshoots for future models. This means that the ‘Gravity’ electric SUV, which is planned as the second series model, may also receive such a performance version.