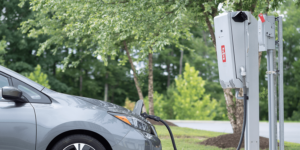 Working with Fermata Energy, a vehicle-to-grid services provider, Nissan has approved the first-ever bi-directional charger for the Nissan Leaf in the US. Fermata’s FE-15 charger has passed essential requirements from Nissan and is UL 9741 certified.

The standard covers V2G equipment in North America. Fermata Energy received the certificate in 2020. David Slutzky, their CEO and founder, said they were “excited to be the first company to receive UL 9741 certification and look forward to partnering with other organisations to advance V2G applications”.

Like Nissan. The Japanese manufacturer has also been working on V2X applications for some time. In Europe, they ran various tests, and in Japan, electric cars have long been deemed a power source in emergencies.

An early example is the Electric Nation project in the UK. Nissan was part of a consortium including energy company OVO Energy. They ran a three-year trial and, in the end, installed 330 bidirectional chargers across UK homes. They found that participants could save up to £725 a year in electricity bills by leaving their cars plugged in when not in use and supplying the grid during peak evening hours.

Also, in the States, the approval was preceded by a real-world test with Fermata and Revel in New York City.

The Nissan Leaf is currently the only fully electric passenger vehicle in the US market able to supply energy to the grid. Utilising the Fermata Energy FE-15 charger, Leaf owners may now charge and potentially sell electricity back to their utility. However, this only works in states with utility demand response programs. Still, the FE-15 charger continuously monitors a building’s electrical loads and may draw on the EV’s energy to provide power to the house during more expensive high-demand periods.

Nissan says it continues to explore the Vehicle-To-Everything (V2X) market, including residential applications, working with leading third-party companies in the space such as dcbel.

“We applaud Nissan for their ongoing leadership in delivering new, meaningful technologies to EV owners. V2X bidirectional charging is an important innovation,” said Fermata CEO Slutzky. The technology would help reduce the total cost of ownership of an electric car while supporting grid resilience, he added.

Currently, the Nissan-approved FE-15 bidirectional charger is only available for commercial and government fleet owners in the USA.