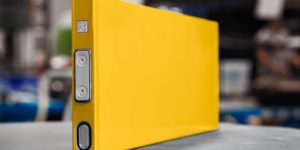 The US battery start-up Our Next Energy (ONE), which is supported by BMW, has presented a large-format prismatic “anode-free” 240 Ah cell with an energy density of 1,007 Wh/l. This cell can also be manufactured much more cheaply. In addition, this cell is said to be significantly cheaper to manufacture.

In the release announcing the new 240 Ah cell, Our Next Energy states that cell-level costs are expected to be reduced to $50 per kilowatt-hour. The cell is said to be the result of 12 months of research and development.

A technical note: The term “anode-free” is of course not a technically correct statement, the battery still has a positive and a negative pole. However, since such “anode-free” battery cells do not require the classic equipment for anode production and for processing the graphite used there, this term has become established in the battery industry. The remaining anode is made of metal.

Since such a metal anode is much easier to produce than the coated graphite or silicon anodes, the elimination of these production facilities contributes significantly to the cost savings. “Our prismatic anode-free cell is produced with approximately half of current cell manufacturing equipment for equivalent capacity, allowing us to sharply reduce scale-up cost,” says Mujeeb Ijaz, founder and CEO of ONE.

In the future, the cheaper 240 Ah cell should also help ONE’s so-called Gemini battery pack to be built commercially in series from 2026. This is a dual-chemistry architecture: the Gemini battery pack combines the 240 Ah cell with robust and durable LFP cells. A new prototype of this mixed battery pack will be installed and tested in a BMW iX before the end of this year. The target is 965 kilometres of range in the vehicle.

The mixed battery pack is also the secret with which ONE wants to make anode-free cells suitable for automotive use at all: Actually, such cells, which basically function like a lithium metal battery, have too short a service life for automotive use. By combining them with the LFP cells, the “cycle and peak power requirements are to be reduced by 90 per cent”, according to the company. In the Gemini battery, ” each special chemistry should be able to focus on different functions”: The LFP cells take care of the shorter distances, while the particularly energy-dense anode-free cells store the power for longer distances. In other words, the high-energy cells are a kind of range extender.

The combined system should offer a lifespan of 250,000 miles, or just over 400,000 kilometres, according to ONE. Technically, such a combined battery pack may be possible and offer advantages on paper for some customer groups. But the real-world tests could provide important insights into how such a system works in everyday life, or how the system needs to manage the cells – for example, when the high-energy range extender cells have a high charge level, but then there is no long-distance driving ahead for a while.

In the press release, Steven Kaye, Chief Technical Officer of ONE, emphasises the simple design of the new cells, as they have been scaled up by a factor of 100 in less than a year – from a 2 Ah pouch cell to the 240 Ah prismatic cell. However, the cell is not yet fully developed: currently, an NMC cathode is installed. By the time series production starts in 2026, it should no longer contain cobalt and the nickel content should drop to around 26 per cent – with a correspondingly higher manganese content.

ONE is also planning to build a battery factory in the USA with an annual capacity of 20 GWh.