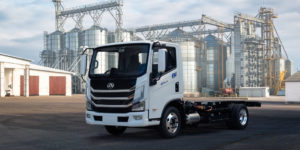 The SAIC brand Maxus, known for transporter vans, has presented an all-electric truck for the first time at the IAA Transportation. With the 7.5-tonne Maxus Electric Light Truck, the Chinese company is venturing into heavier realms for the first time.

“As our ever-growing range of electric vehicles shows, the Maxus brand goes beyond light commercial vehicles. Our long-term goal is to be as relevant in cars and trucks as we are now for the LCV market,” Jack Zhu, Maxus parent company SAIC’s general manager in charge of Europe, classified the launch of the 7.5-tonne truck in an accompanying company statement.

The electric light truck is 5.85 metres long, 2.15 metres wide and 2.27 metres high. With a body, the length increases to 6.40 metres. Maxus does not give any details about the electric drive, but about the energy storage: the Maxus Electric Light Truck has a 128 kWh LFP battery on board, which is supposed to allow a combined WLTP range of more than 210 kilometres and up to 412 kilometres in city traffic when fully loaded.

The 7.5-tonne truck is also fast-chargeable: according to the company, the battery can be charged in around 1.5 hours at 100-kW DC stations, while the process takes around eleven hours at 22-kW AC chargers.

Maxus does not get much more precise than that. The SAIC brand only gives a few details about the equipment. Among other things, the electric truck has twin rear tyres and numerous assistance systems, including an emergency braking system and a lane departure warning system.

While the 7.5-tonne van rounds off the Maxus model portfolio, which has so far consisted of smaller and larger vans, the manufacturer is simultaneously expanding its LVC range for the Federal Republic. In Hanover, the Chinese company will present the new electric models Mifa 9 and T90 EV, which were already presented in England at the end of May, to the German public for the first time.

The Mifa 9 is a seven-seat van. The electric passenger carrier is 5.27 metres long, a smooth two metres wide and 1.84 metres high. With a 90 kWh battery with unspecified cells from CATL, a WLTP range of 440 kilometres should be possible. The electric motor is rated at 180 kW and is said to offer a maximum torque of 350 Nm.

The Maxus T90 EV electric pickup is the electric version of the T90 available in China. The electric motor has a power output of 150 kW and 310 Nm, the battery has an energy content of 89 kWh. The range is given as 330 km according to WLTP and the payload as 925 kilograms.

The electric transporter E Deliver 3 came out in the UK in 2020, and has been joined by the E Deliver 9 since then.

“With this trio, Maxus once again underlines its versatility in the all-electric commercial vehicle segment. Whether courier service or logistics, horticulture or shuttle service, our model portfolio will cover almost every type of transport in future,” explains Gerald Lautenschläger, Managing Director of Maxomotive Deutschland GmbH as the designated importer of the commercial vehicle brand in Germany. “Maxus’ participation in the IAA shows the importance of the German and European market: this is the only way to implement the brand’s ambitious growth strategy.”